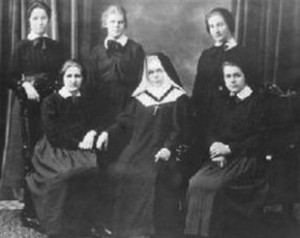 The history of the Sisters of the Order of St. Basil the Great, an international group of women religious, begins in the fourth century with St. Basil, their patron.  St. Basil, the Bishop of Caesarea Cappadocia in Asia Minor, known as the Father of Eastern Monasticism, taught three principles for this life:  the Gospel as Rule, Community Life, and Service to the local Church.  His sister, St. Macrina, his mother, St. Emellia, and other women including their former servants, lived in a monastery for women across the river from the one Basil began for men.  After his death, his way of life spread through Greece and into Europe.

Though monasteries arose and declined through the centuries, record keeping and documentation were either poorly done or non-existent. However, records show that the first Sisters of St. Basil came to America in 1911 from a monastery in Europe.  A courageous group of four Sisters arrived in Philadelphia under the head of Mother Helen Langevych.  Shortly after, Mother Macrina Melnychuk, who had been the Directress of a famous Girls Institute in Poland followed.  Mother Macrina became the first Novice Directress in America, and after Mother Helen’s death, she succeeded her as Superior of the Community.

In January 1921, Mother Macrina responded to the request of the Apostolic Administrator, for Sisters to serve the people of Ruthenian descent in America, and founded Our Lady of Perpetual Help Province in Cleveland, OH.  The first convent and novitiate there was a ten-room house.  Five young women came in the spring of the same year and the community began to grow.  The care of orphan children was the initial apostolic work of the small community.

When the Fraternal Organization, the Greek Catholic Union, built a large orphanage in Elmhurst, PA in 1923, they asked the Sisters to relocate the orphans from Cleveland to staff this new St. Nicholas Orphanage.  One wing of the structure served as a residence and novitiate for the fledgling community. With the growth of both orphans and Sisters, these accommodations soon became inadequate. At about this time there were requests for the Sisters to teach in parish schools.  In 1925, Sisters went to staff the first school in Wilkes-Barre, PA.  From these humble beginnings, the apostolate of education grew to the staffing of thirty-three schools – elementary, secondary and catechetical- at its highpoint in the 1960’s. Many of the Sisters dedicated their lives to education, teaching not only the religious and academic subjects, but also touching untold lives by their witness and their imparting of Christian values in the Byzantine Catholic Church.

Continued growth in ministry and members necessitated another move for the Sisters.  This time it was to Factoryville, PA in October of 1927, where the Sisters purchased a 170-acre farm with several frame buildings. The Sisters realized early on that this property was not an ideal site for a permanent motherhouse. Material facilities were lacking, and the spiritual opportunities so needed were even more remote because of distance from Byzantine parishes and clergy.  Some neighbors were unfriendly to the Sisters, and others showed open hostility. It was obvious that they had to seek for a more suitable place.

Financially, though, this seemed impossible.  It was the era of the Great Depression, and the money that the Sisters had been able painstakingly to save was lost in a bank failure.  However, the Providence of Almighty God intervened and in a series of extraordinary happenings, the Sisters acquired the property known today as Mount Saint Macrina in Uniontown, PA as a permanent motherhouse. The down payment was realized by the sale of the Factoryville property, and through the generosity of many charitable people, Oak Hill, the once palatial but now greatly neglected estate of the former millionaire coal baron Josiah Van Kirk Thompson, was bought and was renamed Mount Saint Macrina in 1933.

Bishop Basil Takach formally dedicated the mansion turned motherhouse in September 1934. Thus began the Pilgrimage in honor of Our Lady of Perpetual Help.  It was encouraged by the deep devotion to the Mother of God that is inherent in the Byzantine Church and among all Slav people, and by the presentation by Pope Pius XI of an icon of Our Lady of Perpetual Help to the Sisters with the request that they spread devotion to her.  This Pilgrimage has become the largest Byzantine Catholic Pilgrimage in North America where hierarchy, clergy, religious and people gather yearly over the Labor Day weekend to give glory to God and honor to his Mother.

When the Sisters moved to Uniontown, they were able to widen the vistas of their apostolate. The Sisters began an ecclesiastical sewing department, weekend retreats for laity inaugurated the Retreat Ministry, numerous catechetical schools thrived in the various parishes and an Academy for girls flourished from 1939 to 1968. Today, the original Thompson Mansion is a House of Prayer where groups and individuals receive spiritual direction and refreshment.

The neighboring mansion where Mr. Thompson’s son and family lived became St. Basil’s Personal Care Home for women in 1947 until 1999, when this building became a home for 12 years of another ministry – the rehabilitation of women who have been involved in substance abuse.

In 1964 the present Monastery, which houses the offices of the Provincial Administration and Sisters’ Residence was completed. This building is also home to a Greeting Card Department. The Religious Gift and Icon Shop are also located on the grounds.

The Sisters built Mount Macrina Manor in 1971, a 133-bed licensed long-term care facility that offers both intermediate and skilled nursing care. It likewise features a Memory Care Unit and a Hospice Care Unit. It has recently completed a two-year renovation begun in 2015 and now includes both in-house and outpatient Rehabilitation Services.

This brief history then is a part of the telling of the Lord’s wondrous deeds that are too many to recount.  As He has inspired and led the Sisters of this Province for over 90 years, and they have followed the many paths that He chose for them, it can be said that what is not written is surely imprinted upon the hearts of those whose lives they have touched.

An excerpt from our Mission Statement reads:

“Jesus Christ calls us to be his praying, healing and life-giving presence.” This has been our focus in our many and varied ministries for the Church and on our grounds.  As we seek to divest ourselves of some of our property and/or buildings, we pray that those who use them after us may do so wisely, showing the same concern and care that we have done in these past 90 years.