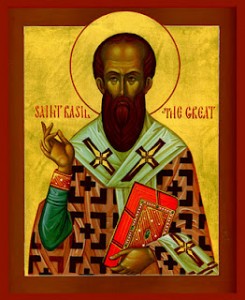 St. Basil was born in 329 in Caesarea, the capital of Cappadocia. It is remarkable to note that from the ten siblings in St. Basil’s family, five children became saints: St. Basil, who became the Archbishop of Caesarea; St. Gregory, Bishop of Nyssa; St. Peter, Bishop of Sebaste, St. Naucratius, and St. Macrina, as well as his grandmother, St. Macrina and his mother, St. Emellia

During his youth, Basil studied in the cities of Caesarea, Constantinople, and Athens. Basil then heeded the advice of his sister, Macrina, and abandoned the secular life and became a monk. Desirous of studying the monastic life, Basil traveled first to Egypt and met ascetic hermits there who dwelled in the caves of the desert. After he had carefully studied their life, Basil returned to his native land, Cappadocia, and withdrew with companions to Pontus on the banks of the Iris River. They divided their time between prayer, meditation on Holy Scripture and manual labor.

Basil favored life in community, for he believed that in the common life one could more perfectly fulfill the commandment to love God and one’s neighbor.

In 362, Basil was ordained deacon, and in 364 he was ordained to the priesthood. In this capacity, he cared for the spiritual as well as the material needs of the people of Caesarea. In the year 370, he became Archbishop of Caesarea.

Basil devoted himself to practical matters such as working with the poor and homeless. He also worked with constancy to settle the question of the unity of the Father, Son and Holy Spirit. To this end, he wrote a treatise entitled, ‘On the Holy Spirit”, as well as many other letters and writings that were instrumental in combatting the heresy of Arianism.

A frail person by nature, St. Basil, at times, neglected himself in his tireless efforts for others. He died on January 1, 379, at the age of 50 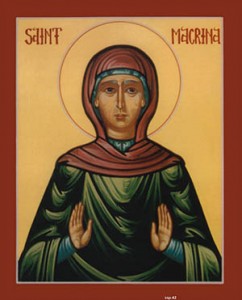 St. Macrina was one year older than her brother, St. Basil the Great. In her youth, she had received excellent formation in spiritual and moral virtues. Macrina studied Sacred Scripture under the supervision of her mother, Emellia, and grandmother, Macrina. Her father died at an early age, and it was Macrina who helped her mother educate her brothers and sisters.

She became an accomplished young woman and in time was engaged to be married. During the preparations for her marriage, the young man to whom she was engaged died unexpectedly. Macrina refused further offers of marriage and became evermore dedicated to helping in the care of her younger brothers and sisters.

When the children had reached maturity and were able to support themselves, Macrina urged her mother, some servants and companions to retire to a family estate on the Iris River in Pontus. Living there in community, they began a life of asceticism, meditation and prayer. Many pious women of various estates flocked to the monastery, eventually following the rule that Basil had legislated for the monks. These holy women fed and clothed the poor; they cared for many homeless and needy persons.

While on her deathbed, Macrina desired to see her brother, Gregory of Nyssa, once more before she died. St. Gregory explains that on his return from a Synod held at Antioch towards the end of the year 379, he had a vision which informed him of his sister’s approaching.  Obeying this inspiration, he hastened to the bedside of his dying sister and they consoled each other with thoughts of the life to come.