During Community Days in late July, the Sisters of St. Basil gathered to celebrate the 60th and 70th Anniversaries of three of their Sisters. Jubilees are occasions for all of the community to reflect on their lives as an affirmation of love, a love story of God and a person. For God did not address his invitation “to whom it may concern.” Rather, He called each one by name; each one was chosen for the unique gifts which she would offer in service to God and to the entire Church. At the Divine Liturgy, the community raised their voices in thanksgiving to God for the accumulated years of fidelity of these Sisters. For the special gift of vocation, there was rejoicing with those who faithfully answered that call, not once but each day of their lives.  Following the Divine Liturgy of Thanksgiving in the Chapel at Mount Macrina Manor, all then proceeded to continue the celebration at a festive meal in the Grove Dining Room.

Sister Vladimir entered the Sisters of St. Basil from St. Mary’s Church, New York, N.Y.   She brought to the Community her special gift in the culinary arts, which she generously offers in service to the present time.  Besides caring for the Sisters’ needs in the various parishes of Archeparchy, Sister Vladimir also served at St. Basil’s Home for Aged Women and at the Archbishop’s Residence in Pittsburgh, Pa. In addition to baking throughout the year, Sister Vladimir brings her unique abilities to the “medovniki” project for the annual Pilgrimage. Sister Vladimir has fine-tuned this particular ministry down to its minutest details. Sister is also responsible for preparing the Holy Chrism which is consecrated for use in all the Eparchies, another ministry to which she has been devoted for a number of years.

Sister Mary Ann came to the Community from SS. Peter and Paul Parish, Struthers, Ohio.  Throughout her religious life, Sister Mary Ann was called upon to serve as a teacher and catechist as well as caring for the needs of the Sisters in the parish missions.  Sister also served at St. Basil’s Home for the Aged and in the Bishop’s residence in Pittsburgh, Pa.  Upon her assignment to the Monastery, Sister assisted the director in various duties. While she was till active, Sister Mary Ann volunteered at Mount Macrina Manor, helped with phone duty, and offered her willingness to be a “personal shopper” for those who need this service. Presently, Sister Mary Ann is a resident at Mount Macrina Manor.

Sister Ann entered the Community from SS. Peter and Paul Church, Warren, Ohio.  Initially, Sister Ann was assigned to the teaching apostolate in a number of schools that were staffed by the Sisters of St. Basil.  She was one of the Sisters assigned to help establish the Office of Religious Education in Pittsburgh. Her Degree in Education from Duquesne University and further graduate studies which focused on various aspects of Eastern Spirituality and Theology enabled her to make a significant contribution in this area. Sister Ann also served the Community in Provincial Administration as Assistant Provincial and Motherhouse Director.  Following this, she served part-time in the Office of Religious Education and part-time in parish ministry at Holy Ghost parish in McKees Rocks, Pa. for five years then moving on to serve full time in parish ministry in McKees Rocks. Presently, Sister Ann is a resident at Mount Macrina Manor.

(Not present for photos were Sister Vladimir and Sister Mary Ann.) 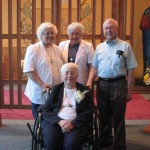 Sister Ann with her sister, Sister Margaret, Sister Seraphim and her brother, Joe. 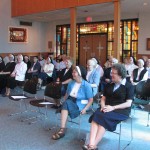 Sisters in chapel at Manor for Divine Liturgy of Thanksgiving 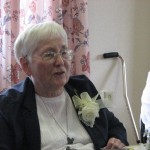