Jubilee is a time to “return to Galilee,” to the time when one first heard the call and to treasure in one’s heart the living memory of that call. It is for the Jubilarians, and for all the Sisters, “a return to that blazing light with which God’s grace touched us at the start of our journey.” These words of Pope Francis express this even more succinctly when he stated, “To return there means reviving the memory of that moment when his eyes met mine, the moment when he made me realize that he loved me.” These are the memories which sustain us on the journey and which we celebrate at each Jubilee.

Nine Sisters of St. Basil celebrated a lifetime of dedication during the annual community day gathering at Mount St. Macrina. From Diamond Jubilarian Sister Maria Petruska, to 40 year Jubilarian Sister Susan Sisko, the Sisters have offered a total of 565 years of loving service throughout our Metropolitan Church. As the Feast of our holy Mother St. Macrina fell during community week, July 19th was the day chosen to honor all these Sisters. The gospel during the Divine Liturgy of Thanksgiving was about the Beatitudes. Father Michael, Monastery Chaplain, noted that this gospel asks the most of us. In addressing the Jubilarians, Father spoke of the depth of their love for the Lord, this love exemplified in their fidelity to the holy vows over the years. No less are they honored for their faithful fulfillment of the various apostolates to which they were called and assigned.

Earlier in the week, the Sisters gathered at the Manor to honor Sister Maria Petruska, Sister Rita Keshock, Sister Paula Dzurisin and Sister Mary Grace, the Jubilarians who now reside there. The joyful gathering began with the singing of odes of the Akathist to Our Lady of Perpetual Help. A wonderful time of socializing followed the congratulations offered by Sister Ruth, Provincial, on behalf of all the Sisters.

Briefly, each one’s ministry is included in the following notes.

Sr. Maria’s teaching ministry included the elementary, high school and college levels both within the Pittsburgh Metropolitan Province and abroad in Palestine, Guam, Japan and Tanzania. Sr. Maria’s empathy for those entering the United States lacking a proficiency in English led her to tutor for the Intermediate Unit I Adult Learning Center in Uniontown. Several of her students still keep in friendly contact with her. Sister now resides at Mt. Macrina Manor.

Sister Rita Keshock entered the community from St. Nicholas parish, Youngstown, Ohio. She spent many years as a teacher and principal before devoting her talents to fine arts and crafts at the monastery. Sr. Rita’s specialty is etching icons on eggs, and she has given many workshops teaching the above technique. Sr. Rita was an active member of the Uniontown Art Club and the Uniontown Flower Club, and she took great joy in sharing her talents and knowledge among the membership. Presently, Sr. Rita resides at Mt. Macrina Manor.

Sister Paula Dzurisin came to the monastery from St. Michael’s in Pittston, Pa. She also spent a good number of years as a teacher and principal in the parish schools as well as at Mount Macrina Academy. During the Alumnae reunions, her students make a point of visiting her.  Following her years in the teaching ministry, Sr. Paula spent a year in pastoral visiting at the Manor.  Her background in business education led to her next assignment, that of managing the Card Department at the monastery. When health issues required a lessening of her responsibilities, Sr. Paula continued to assist in that same ministry for a number of years. Sr. Paula now resides at Mt. Macrina Manor.

Sister Bernarda Sevachko entered the community from St. Nicholas parish in Youngstown, Ohio. Sr. Bernarda’s first 45 years of service were devoted to the teaching apostolate. For the next 25 years, with unflagging energy, she has been active in pastoral and catechetical ministry for the five Byzantine Catholic parishes in the Youngstown area. Her ministry is marked by the enthusiasm which she brings to all she does. At present, there is no indication that Sister Bernarda is thinking of retiring.

Sister Regina Adams came to the community from St. Mary’s Byzantine Catholic parish, Trenton, N.J. Sister had been both teacher and principal in many of the schools staffed by the Sisters in Pennsylvania, New Jersey and Ohio. After leaving the teaching apostolate, Sr. served in parish ministry in her home parish of Trenton, N.J. for five years. She is currently serving in parish ministry for the Wilkes-Barre, Kingston and Swoyersville parishes, as well as cantoring at St. Mary’s Parish, Wilkes-Barre.

Sister Melita Marie Penchalk entered the community from St. Nicholas Byzantine Catholic parish, Barberton, O. Sister served mainly in the teaching apostolate on both the elementary and secondary levels in the schools in Pennsylvania, Indiana, Ohio, New Jersey and New York, Sr. Melita also served in administration as a Provincial Councilor. After this, for the next 12 years, she was an Assistant Superintendent of Catholic Schools in Phoenix, Ariz.  Presently, Sr. Melita serves as community archivist and helps part-time in the Gift Shop.

Sister Mary Grace Skuban entered the community from St. Mary’s Byzantine Catholic Church in Taylor, PA. Sister was an LPN on the staff of Mt. Macrina Manor, serving both in direct nursing care and in medical records. Other ministries were at the Byzantine Catholic Seminary, at Mt. Macrina House of Prayer, and as Activities Director at St. Basil’s Home. Upon returning to the monastery, she served as monastery sacristan as well as assisting with the health care of the Sisters at the Monastery. Sr. Mary Grace now resides at Mt. Macrina Manor.

Sister Seraphim Olsafsky served two terms as Provincial of Our Lady of Perpetual Help Province in Uniontown. She entered the community from St. Edward’s Roman Catholic Church in Youngstown, Ohio. Sr. Seraphim was active in a variety of ministries, beginning her apostolic work as a teacher and/or principal in Connecticut, Pennsylvania and Ohio. Sr. Seraphim also served as Directresss of Novices, as Assistant Provincal, Personal Formation Directress, Social worker, Curator of the Archieparchial Museum and Director of the Byzantine Seminary Press. Presently, she is Director of Mount Macrina Cemetery and Mausoleum.

Sister Susan Sisko came to the community from St. John the Baptist Church in Bridgeport, Conn.

As with most of the community, Sister was active in the education ministry at both the elementary and secondary levels, sometimes concurrently as principal. In addition to being on the Provincial Council for two terms, she also served as Coordinator of the Monastery community during this time. Vocation, Formation and Young Adult Ministry were also assignments carried out by Sr. Susan. Presently, Sr. Susan is a resident director at Notre Dame University in Indiana.

Each of the Sisters has brought a diversity of gifts and talents to the Province, and each has enriched it in her own unique way.  May God grant each of them many more spiritually fruitful years in His service. 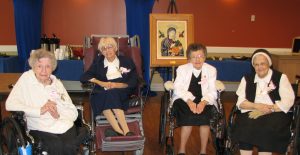 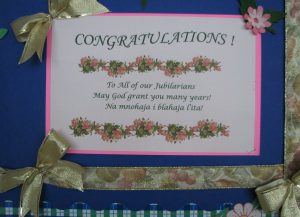 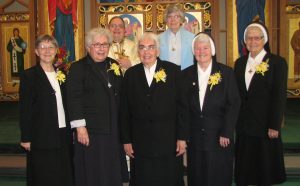 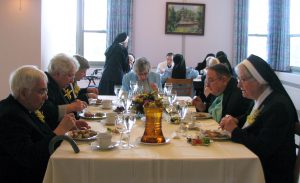