“He is going ahead of you to Galilee; there you will see him.” 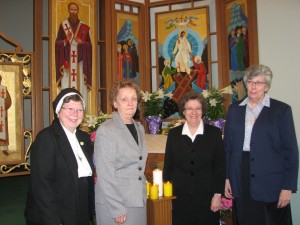 The graced time of the Provincial Chapter of the Sisters of St. Basil led to the election of Sister Ruth Plante as Provincial; Sister Margaret Ann Andrako as Assistant, and Sister Sylvia Burnett and Sister Joanne Lickvar as Councilors. The above quote from Matthew 28:7 will surely be an inspiring quote for the new administration to hold in their hearts over the course of the next five years. Although the team is new in one sense; each of those elected have been in Province Leadership in the past and come well-prepared for the tasks set before them.

While preparing for Provincial Chapters, at times the Sisters chose the Myrrh-Bearing Women as themes for their prayer and reflection before and during the long process. The weekend of April 16-19, these holy women proved to be a rich source of inspiration as the Sisters engaged wholeheartedly into the process of “Facing the Future with Courage.” In one of the petitions during the Divine Liturgy, we prayed “that we may be as open and trusting as the Myrrh-Bearing Women disciples . . .’

With this in mind, the total community entered into a discernment process which involved exchange and interaction with all of the nominees before the actual election took place. This process was preceded by a prayer asking “for freedom of heart that we may act for the good of each other, for the province, and for the good of those we serve in sincere love.”

At the conclusion of the Chapter and encouraged by the words of St. Basil that “There is nothing unpremeditated; nothing neglected by God for God’s unsleeping eye beholds all things,” each Sister made a generous promise in support of  “Facing the Future with Courage.” The Sisters are most grateful to all the faithful who offered their prayers for God’s blessing on this significant event in the life of Our Lady of Perpetual Help Province.