The main ceremony was held Saturday, October 4 in the Newark Cathedral Basilica where her portrait and relic were displayed.  Dozens of Byzantine Catholic priests and faithful joined in the Liturgy, including Barbara Soltis, who was Sister Susan’s first grade student in Bridgeport, Conn.

Sunday, we made our way to Convent Station, home of the Sisters of Charity of New Jersey. We prayed at the crypt where Sister Miriam Teresa’s remains are preserved behind a wall in a small room in the motherhouse chapel.  A very modest display of photos, memorabilia, and an intention book were there.

We enjoyed lunch with the Sisters of Charity. I congratulated them on the beautiful Beatification ceremony the day before. I told them it was on the standard of the ceremonies in the Vatican Basilica, including a magnificent choir; the participation of many Sisters in the ceremony, as well as the man who was healed as a child and the family of Sister Miriam Teresa; an excellent homily; and, comments by the General Superior who acknowledged the new Blessed’s Byzantine Ruthenian roots.

We and about 30 Sisters of Charity then went to St. John the Baptist Byzantine Catholic Church, Bayonne, N.J. where Sister Miriam Teresa was baptized and attended into her teen years.  Her photo has been hanging in the vestibule of the church for a long time. There we participated in a Hierarchical Divine Liturgy with our Bishop Kurt Burnett and many priests. Thirty volunteer cantors led the singing from the balcony. The parish did a beautiful job organizing everything.  They had a holy card prepared as well as an icon for the tetrapod. The beautifully decorated church was filled with Eastern and Western Catholics some of whom travelled from as far away as Michigan.  An abundant dinner followed in the parish hall.

On our way back to the Mount, we stopped at the Shrine of St. Elizabeth Ann Seton to thank her for the new Blessed Miriam Teresa.  We prayed at her tomb in the Basilica and visited the museum which features her life story and memorabilia. All of these experiences were truly inspiring!

Thanks to the Sisters of Mercy in North Plainfield, New Jersey who hosted us in their guest quarters and were most gracious. 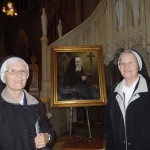 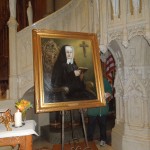 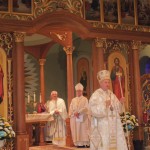 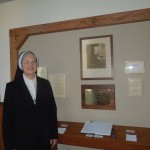 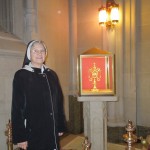 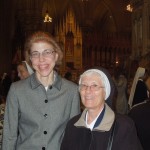