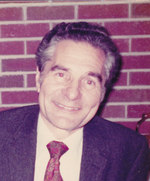 Pat was the son of the maid and butler who served J.V. Thompson, the Coal Baron, until his death in 1933.  Pat was born in the Thompson mansion and was very much a part of the life of J.V. and his grandchildren who lived at Fox Hill, the enjoining estate. When J.V.’s vision began to fade, Pat read the morning paper to him before going off to school. In his mid-nineties, Pat still got emotional when J. V.’s death was mentioned – he was 16 at the time.

Pat and his parents moved to another part of the property once the Sisters made the mansion their first monastery and renamed Oak Hill Estate Mount St. Macrina.  His parents are buried here. Pat went on to university and spent his life as a chemical engineer after marrying his high school sweetheart. For the last couple of decades he was her faithful caregiver. Hazel died in November after their 72 year relationship.  Everyone expected Pat would want to join her soon.

After Pat’s retirement, he moved back to this area from Ohio where he had raised his two children.  He introduced himself to us and happily supplied fascinating details of life at Oak Hill.  He delighted in regaling folks with the stories at elder hostels held at the mansion, now the House of Prayer, or at the tours during the National Road Festival. He assisted the Laurel Highlands High School Advanced History students in producing a booklet with the history and reprints of the photos of the house during the Thompson’s time, still available.

All who knew Pat – who called himself “Pontius Pilot” since he flew aircraft in his job, were delighted with his Italian charm and humor as well as with his interesting memories of an era gone by.  So many will miss him. We, for our part, will continue to pray, with gratitude, for Pat and Hazel.  Eternal memory and peaceful repose!