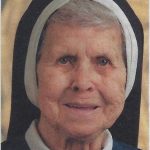 Very peacefully, as she had always wanted, +Sister Gertrude (Irene) Martin moved from the earthly realm to the heavenly in the early evening of Wed., Nov. 28, 2018. There, she was surely welcomed by the Lord she served with fidelity and enthusiasm for 75 years.

Sr. Gertrude was born in Homestead, Pa., the daughter of the late Nicholas and Ann (Kopas) Martin, the middle child of thirteen siblings. She entered the community from St. John the Baptist Cathedral Parish in Homestead on October 3, 1943. Sr. Gertrude made her Final Profession of Vows on August 19, 1951 in the presence of the late Rev. John Kocisko.

Her teaching apostolate spanned 33 years, 12 of which she also served as principal. Still in the teaching apostolate, she additionally served as a member of the Provincial Council for five years. For another six years, Sr. Gertrude ably administered St. Basil’s Home for Women. A brief return to teaching took her to Trenton, N.J. before she returned to the monastery, Sister’s energetic nature and varied talents then led her to be assigned as the manager of the Religious Gift Shop. At the Gift Shop, she was a familiar face for over ten years, tending to all aspects of this special ministry of the Sisters. It was a ministry from which it was hard for her to take leave, since she especially enjoyed being there.

In 2005, Sister retired from active ministry, but she busied herself at the monastery with various projects, since she was not one to sit still and watch the world go by. At the monastery, she will be especially remembered for directing the Christmas decorating throughout the house. Even now, as soon as that season rolls around, her name is invariably mentioned.

Each year, the National Religious Retirement Office publishes a poster to become the basis of their campaign materials.  They select Priests and Sisters whose faces are a reminder of the more than 35,000 religious past the age of 70 years living in the United States.  For the 2009 poster, Sr. Gertrude was one of our three Sisters to be chosen. One could not help but be attracted by those deep set blue eyes and infectious smile, the face of a happy Sister.

Sr. Gertrude was preceded in death by her parents, and 11 of her siblings; her brothers Nicholas, John, Edward, Raymond, Donald, Elmer and Clifford; and her sisters

Ann Kasko, Pauline Pushcar, Mary Baka, and Eleanor Stellute. In addition to her Sisters in community, she is survived by her brother George Martin, her sister Verna Savko, and many devoted nieces and nephews and their families.

Relatives and friends will be received at the Monastery Chapel on Monday, December 3 from 3:30 pm to the time of the Parastas Service which will be sung at 7:00 pm. The Funeral Divine Liturgy will be celebrated by Archbishop William C. Skurla on Tuesday, December 4, at 10:30 am. Interment will follow in the Dormition Section of Mount Macrina Cemetery.