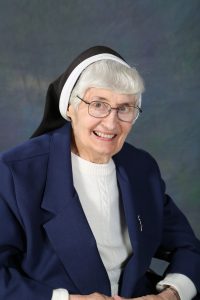 Early in the morning of Sun., Nov. 19, 2017, Sr. Rita (Florence) Keshock fell asleep in the Lord at Mt. Macrina Manor. While the community was praying Matins on Sunday, commemorating the Resurrection, she surely met her Risen Lord with joy and gladness.

Sr. Rita, the daughter of the late Michael and Sophia (Backus) Keshock, was born in Campbell, Ohio. She entered the Sisters of St. Basil the Great from St. Nicholas Byzantine Catholic Church in Youngstown, Ohio, on June 12, 1947, and made her Final Profession of Vows on Aug. 28, 1953.

Sr. Rita spent half of her religious life in the ministry of education for which she was well–prepared, having earned both a Bachelor’s and Master’s Degree in Education. While she served diligently in the many schools staffed by the Sisters at that time, there was a new ministry waiting for her in the wings. An article in the Byzantine Catholic World dated Jan. 14, 1996 summed it up in the words: Basilian Sister Finds New Home in the World of Art.

This was her passion. In her own words, Sr. Rita explained, “I am now a painter, a calligrapher, a crafter and an etcher.” Having learned the craft of etching onto eggs, she discovered that this would be a perfect medium for producing icons. Spending hours in her art room Sr. Rita noted that she often became lost in meditative thought of the beauty of life as she worked. Sister took great pride in the fact that, particularly her etched icons, were displayed in a number of exhibits throughout the country. She also taught the craft of etching on eggs to others in numerous workshops, thus leaving a legacy of this favored ministry of hers.

Sr. Rita was preceded in death by her parents, her sisters Mary Louise and Alice (Kuzmack) and her brother Edward. She is survived by her brothers John (Katherine), Robert (+Kathryn) and Charles (Joann), her sister-in-law, Mary Jo and several nieces and nephews.

Relatives and friends will be received at the Monastery Chapel on Fri., Nov. 24, 3:30 p.m. to the time of the Parastas Service, which will be sung at 7:00 p.m. The Funeral Divine Liturgy will be celebrated on Sat., Nov. 25 at 10:30 a.m. in the Monastery Chapel by Archbishop William C. Skurla. Interment will follow in the Dormition Section of Mount Macrina Cemetery.