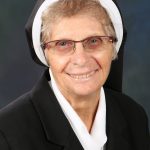 Some last-minute preparations at the Pastoral Center in Phoenix, Ariz., would be the last joyful and loving service Sr. Jean Marie would offer in the long list of her missions as a Sister of St. Basil. It was from that place that Jesus called her to Himself on Thursday evening, the 18th of May.

Sr. Jean Marie (Joanne Ann) Cihota was born in Mingo Junction, Ohio, the daughter of the late John and Anna (Burch) Cihota. She entered the Sisters of St. Basil from St. Nicholas Church in McKeesport, Pa., on February 2, 1956, and made her Final Profession of Vows on August 20, 1961.

Sister Jean Marie began her ministry as a teacher on the elementary level for about a dozen years before being called to be part of the team which organized the Religious Education program and office in Pittsburgh. As part of this group, she collaborated in initiating the God With Us series for Eastern Christian Formation. Her years in this ministry included beginning the same office in the Parma Eparchy. The office being firmly established there and in Pittsburgh, Sr. Jean Marie was called to Pastoral Ministry for the Passaic Eparchy at St. Therese Church in St. Petersburg, Florida. Here her many talents and gifts were put to good use until she answered the call to community ministry as the Assistant to the Provincial.

Sr. Jean Marie held this position for ten years, also coordinating the many aspects of life in the monastery. Additionally, she served as Vocation and Affiliate Directress for the community and was also appointed Assistant Vocation Director for the Archeparchy of Pittsburgh. Her term of office concluded, the West beckoned Sister Jean Marie, and the Eparchy of Phoenix became the home of her heart for the last years of her life. She was no less generous in expending her efforts in this mission territory than in all her previous years. While she may be remembered for the Myrrh-Bearers Retreat, for her work in Safe Environment, and her continuing involvement in Religious Education, Sr. Jean Marie herself wrote that she would like to be remembered for “my love of the Lord and all I come in contact with! My great love and zeal for our Byzantine Catholic Church! Spreading the Good News of Christ!” This she truly lived fully for more than 60 years as a Basilian Sister.

Sr. Jean Marie was preceded in death by her parents, her stepmother Mary Ferko Cihota, and her sister Patricia Bellis. In addition to her members in community, she is survived by her cherished brother John, her sister Mary Lynn Rebholz, her stepsister Rita Ferko Joyce, and many devoted nieces, nephews and their families.