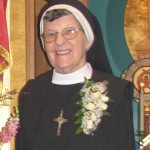 “Let the faithful rejoice in glory, shout for joy and take their rest.” These words sung at the Divine Liturgy were in our hearts on the morning of Sister Leona’s falling asleep in the Lord on June 20. After 81 years of faithful service to the Lord, she surely deserved both the glory and the rest, and while we could not picture her “shouting,” we could certainly share in her joy.

Sister Leona was born in the village of Hrabske in what was then Czechoslovakia, the daughter of the late John and Mary (Hrabar) Trudich.  She entered the Sisters of St. Basil the Great from St. John the Baptist Church in Lansford, Pa., on June 23, 1936, at the tender age of 16, and she made her Solemn Profession of Vows on Nov. 30, 1944.

Sister Leona served from Chicago to the East coast in the ministry of education as principal, teacher and catechist.  During her long academic career, fortified by both a B.S. and M.S. in Education, she taught in 18 schools. When teaching was no longer an option, Sister Leona served in parish ministry in the Hazleton area before retiring to the monastery in 2005. There she look forward to participating daily in the prayer and activities of the Sisters. One could always depend on meeting Sister in the halls with her rosary beads in her hand.

Sister Leona carried this same spirit of prayerfulness with her when she became a resident at Mt. Macrina Manor in 2013. Like her good friend, Sister Leonora who preceded her in death by several weeks, Sister Leona always greeted those who visited her with a smile. At the age of 82, together with Sister Leonora, she took up learning to play the violin, and both Sisters were featured in the local newspaper lauding their taking this step in their mature years.

Sister Leona wanted to be remembered for her love of teaching, her love for her parents and family and for her spirit of trust, love and gratitude to the Sisters. To this she added forgiveness and “many thanks to everyone.” Those who knew her, or who worked with her, would add the qualities of kindness and thoughtfulness of others.

Sister Leona was the last surviving member of her immediate family, having been preceded in death by her parents and her sisters Mary Bujnak, Anna Oross and Julia Dotsey. In addition to her community, she is survived by several nieces and nephews and their families.

Relatives and friends will be received at the Monastery Chapel on Thurs., June 22 from 3:30 p.m. to the time of the Parastas Service which will be sung at 7:00 p.m. The Funeral Divine Liturgy will be celebrated on Fri., June 23 at 10:30 am in the Monastery Chapel by Archbishop William C. Skurla.