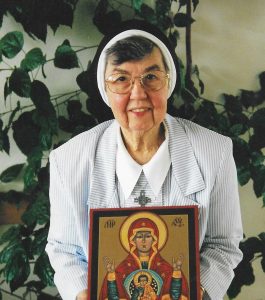 Sr. Stephanie (Elizabeth) Bavol quietly and peaceful entered the fullness of life on Mon., Oct. 17. After retiring from active ministry due to health issues, Sr. Stephanie resided at Mt. Macrina Manor for the past eight years. Her cheerful countenance and acceptance of this change in her life was an inspiration to all who cared for her. She never failed to greet one with a smile and the question, “So how are you doing?”

Sister Stephanie was born in Trenton, N.J., the daughter of the late John and Susan (Vasilko) Bavol. In 1941, she entered the Sisters of St. Basil from St. Mary’s Church, Trenton, N.J. Having made the decision to offer her life in service to God at the early age of 16, she remained faithful to this call for 76 years.

Sr. Stephanie’s life in ministry ranged from being prefect of boys and girls in St. Nicholas Orphanage, to prefect at Mt. St. Macrina Academy, to being a teacher in the primary grades for over 25 years in the various places where the Sisters served. Of her last and most beloved ministry, that of iconography she wrote, “My last apostolate which is iconography—is the most prayerful and peaceful. I pray that the Holy Spirit will continue to guide and help me.” Sr. Stephanie, in fact, has the distinction of being the first iconographer in the community.

Following upon her degree in education and certification in Elementary Education and Art from Marywood College, she was privileged to pursue her study in art under Master Iconographer, Philip Zimmerman, with whom she also conducted workshops both in this country and abroad. Over the years, Sr. Stephanie had been commissioned to write several icons for special occasions, one of which was presented to Pope St. John Paul II by the late Archbishop Judson Procyk as a token of esteem and gratitude. Through prayer and inspiration, Sister Stephanie also wrote an icon depicting the Call of the Apostles which became the official Vocation Icon of the Eparchy of Passaic at the time. These and many other commissioned icons and the several which grace the walls of the monastery near the chapel are testimony to Sister’s gifts and God-given talents.

Sr. Stephanie was preceded in death by her parents, her sisters Mary Bavol, Ann Vanisko, and Margaret Mattaliano; and her brothers John and Michael Bavol. In addition to her members in community, she is survived by her cherished sister, Sr. Theresa, also a member of the Sisters of St. Basil, and many devoted nieces and nephews.

Relatives and friends were received at the Monastery Chapel on Thurs., Oct. 20 and the Parastas Service was sung that evening. The Funeral Divine Liturgy was celebrated on Friday morning, Oct. 21, in the Monastery Chapel. Interment followed in the Dormition Section of Mount Macrina Cemetery.