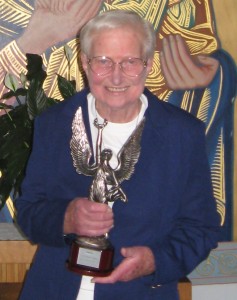 God graciously granted Sister Dorothy Louise’s wish to attend the Pilgrimage one more time. Just a few days after it concluded, Sister Dorothy Louise (former Sr. Joachim) peacefully fell asleep in the Lord Jesus at Mt. Macrina Manor on Thursday, Sept 10, 2015. The daughter of the late Michael and Barbara (Reyta) Balock, Sister Dorothy Louise was born in Patton, PA. She entered the Sisters of St. Basil from SS. Peter and Paul Byzantine Catholic Church in Patton, PA, on September 15, 1950. She pronounced her First Vows on November 27, 1952 and made her Perpetual Profession on January 1, 1956 in the presence of the late Very Rev. George Bonchonsky.

Sister Dorothy Louise spent the first years of her sixty-five years as a Sister of St. Basil in the teaching ministry. She then served a term on the Provincial Council and Coordinator of the monastery community. From 1977 to the end of her life, Sister Dorothy Louise’s ministry was in one way or another involved in health care. She served as the Administrator of Mt. Macrina Manor from 1977 through 1993. For the next few years, Sister resided at the monastery tending to personal health needs.

Probably what became her best-loved ministry began in 1997 when she worked as a Spiritual Counselor for what was then Albert Gallatin Hospice. When declining health required that she limit her work hours, she continued to volunteer her services assisting patients and families with addressing their spiritual needs, especially those facing the crisis of terminal illness. As a cancer survivor three times, she was well prepared to walk these paths with those who came within the sphere of her care and concern. Her empathy with her patients was so well-regarded that she was named as Volunteer of the Year by Amedisys (Albert Gallatin Hospice). Her nomination stated that she is “Albert Gallatin Hospice’s Angel on Earth.” In the last years of her life, she resided at Mt. Macrina Manor where she became the recipient of those services which she so ably offered to others.

In her personal request form, Sister Dorothy Louise noted that she would want to be remembered for the faith and trust she had in God’s love in overcoming physical challenges and for enjoying the good times in life. Her family, her relatives and her many friends would willingly attest to both. In her vocation story, Sister wrote, “Much of my inspiration comes from the quote from Isaiah 43: ‘I have called you by name and you are mine.’  It helps me have an attitude of gratitude – counting your blessings takes one across the valleys of life and builds confidence in God’s goodness, I have learned.”

In his homily, Father Michael Huszti, monastery chaplain, alluded to Sister’s work in health care, stating that it could not have been more in line and consistent with the emphasis St. Basil himself urged for his own community, when as Bishop, he established homes for strangers and travelers and hospitals for the sick and infirm of his time. Father went on to state, “Sister Dorothy Louise’s vision and her contributions, along with her ongoing concern for health care improvements for the residents, involved providing care of a dual nature, enriching and vitalizing the whole person, body and soul, by sharing her love for Christ and instilling the same empathy among her peers, the health care nurses, aides and other employees.” Father concluded his homily with the prayer, “Never setting Sun, we beseech you to intercede for the nun, Dorothy Louise, whom many have come to know and love, present her in the court of the saints, as heir to the treasure of heaven and for her eternal memory.”

Sister Dorothy Louise was preceded in death by her parents, her sisters, Elizabeth Somics, Ann Schaefer, and Catherine Pinksaw; and her brothers, Michael, John and George Balock. In addition to her Sisters in community, she is survived by her many devoted nieces and nephews and their families. The Parastas Service was celebrated by the Very Rev. Robert Pipta with Rev. James Ragan in attendance. The Funeral Divine Liturgy was celebrated by the Very Rev. Andrew Deskevich; concelebrants were Rev. Michael Huszti, Monastery Chaplain; Rev. Vasyl Symyon, Rev. Vasyl Banyk and Rev. Mykhaylo Shkyndya. In attendance were the Very Rev. Dennis M. Bogda, Very Rev. Ronald P. Larko, Rev. James Spontak and Rev. Stephen Wahal. Interment followed in the Dormition Section of Mount Macrina Cemetery.