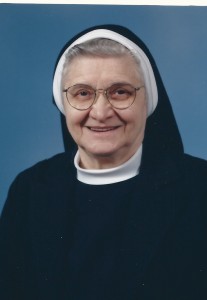 Having reached the venerable age of 101 this past November, Sister Martha (Mary) Dzura completed her earthly journey at about 8:30 a.m. on Friday, March 4, 2016. Very peacefully, she fell asleep in the Lord to whom she devoted almost 80 years as a Sister of St. Basil the Great.

The daughter of the late John and Eva (Kranack) Dzura, Sister Martha was born in Lambert, PA. She entered the Sisters of St. Basil from Nativity of the Blessed Virgin Mary Church in the Greenfield section of Pittsburgh on July 15, 1937. She pronounced her First Vows on September 4, 1939 and made her Solemn Perpetual Profession on August 28, 1945 in the presence of the late Monsignor John Powell.

Over a half century of her religious life was dedicated to teaching in the many parish schools served by the Sisters, also serving as principal at the same time. During the span of her teaching career, Sister Martha was sometimes assigned to a previous school mission, and in this way, often taught three generations of the same family. In speaking at the Liturgy about Sister Martha’s life and ministry, Archbishop William alluded to the verse in Psalm 90 which reads: “Seventy is the sum of our years; or eighty, if we are strong.” Archbishop stated that in visiting the churches throughout the country, he met many who had been taught by the Sisters of St. Basil and are now leaders in their churches or communities. Sister Martha lived well over eighty years, so who can imagine the countless students she influenced who now lead productive lives.

Upon her retirement from the teaching ministry, Sister Martha returned to the monastery in Uniontown, where she helped in the Vestment Department as well as assisting office personnel with answering the phone. Sister Martha’s life of active ministry came to an end in March of 2004, when she took up residence at Mt. Macrina Manor due to declining health. In her personal wishes stating how she wanted to be remembered, Sister Martha made note of her love of teaching, her deep faith and her spirit of trust. She further stated, “I am deeply grateful to the Sisters for their prayers, support, kindness and patience offered to me during my illness.” Surely, Sister would have extended this same gratitude to all those who were her caregivers at Mt. Macrina Manor.

Sister Martha was preceded in death by her parents and her brothers John and Michael. In addition to her Sisters in community, she is survived by her nephews Jack and Michael and their families. The Parastas Service was concelebrated on Sunday, March 6 by Rev. Michael Huszti and Rev. Stephen Wahal. Very Rev. Archpriest John G. Petro was in attendance. The Funeral Divine Liturgy was celebrated on Monday, March 7 by Archbishop William Skurla with Rev. Michael Huszti as concelebrant. Interment followed in the Dormition Section of Mount Macrina Cemetery.

May God grant to his handmaiden, Sister Martha, eternal memory and peaceful repose.