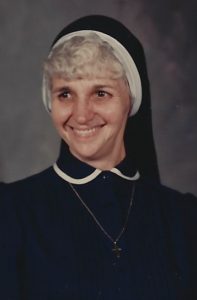 After struggling with multiple health issues for a number of years, Sister Pius (Irene) Yavor fell asleep in the Lord on Monday, December 14, 2020. She fell seriously ill with the coronavirus. With permission, Sister Pius had been living apart from community. She was staying with her family, and it was from her home in Perth Amboy, NJ that the Lord called her to Himself.

Sister Pius was born in Perth Amboy, NJ, the daughter of the late George and Anna (Andrejo) Yavor. She entered the community from St. Nicholas Byzantine Catholic Church in Perth Amboy, NJ on September 24, 1951 and made her Final Profession of Vows on August 15, 1957 in the presence of the late Bishop Nicholas Elko.

For several of her years in active ministry, Sister Pius was involved in teaching and catechesis. Of those years, from 1979 through 1983, she was teacher and principal in St. Michael’s School in her hometown of Perth Amboy. While there, she was ahead of her time in initiating computer classes after school for those interested. Evangelization then became her focus, and with great enthusiasm, she answered the request of Rev. John Zeyack of St. Thomas Church in Rahway, NJ to serve in this parish ministry.

What became Sister Pius’s best-loved ministry followed in 1988 when she was hired to serve in Campus Ministry at Seton Hall University in South Orange, NJ. It was her joy to be available to the students there, and her engaging personality lent itself to this work. Additionally, Sister Pius served as an instructor in the Adult Enrichment Program of the Passaic Eparchy and as a member of the Passaic Diocesan Catechetical Board

Even though no longer engaged in active ministry for the community, Sister Pius was often on the phone with those who sought her comfort and counsel. It was heartening to her to be a healing and praying presence for those who called upon her.

Sister Pius was preceded in death by her parents, her brother George (Gerry) and her sisters, Marie and Anna (Malik). A day after her passing, her sister Margaret followed Sister Pius into eternity. In addition to the members of her community, she is survived by her niece Venus Majeski.

May God grant to his handmaiden, Sister Pius, eternal memory and peaceful repose.