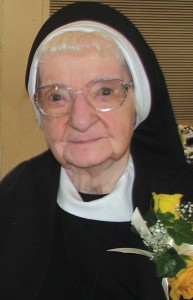 Sister Vitalia would have celebrated her 107th birthday in early June. Instead, she celebrated her patronal Feast Day by entering into the Heavenly Kingdom on Friday morning, April 22, 2016. Sister Vitalia entered the community in Elmhurst, Pa., in 1930, when the community was only in existence nine years, so she was one of the first vocations to answer the call to the Sisters of St. Basil.

The daughter of the late Stephen and Anna (Belley) Tomcho, Sister Vitalia was born in Walhonding, Ohio. She entered the Sisters of St. Basil from St. Gregory Church in Lakewood, OH on October 27, 1930. She pronounced her First Vows on August 30, 1932 and made her Solemn Perpetual Profession on August 21, 1938 in the presence of Bishop Basil Takach of blessed memory.

In her vocation story which was published a few years ago, Sister Vitalia stated that teaching became her lifelong work. In fact, at the time of her retirement from active ministry, Sister had the distinction of offering the longest active service of any of the Sisters in community. Her teaching ministry spanned 67 years, most of these as a full-time teacher and/or principal. Only the last few years were spent in tutoring on a part time basis. Although Sister liked all the places where she was sent, her favorite time and place was teaching the sciences and math at Mount St. Macrina Academy in the 1950’s. It was a great joy for her when the Alumnae returned to the Mount for their reunions and took the time to visit with her. Among the things she enjoyed were trips to the shore, visiting her late sister, good food, and even cooking it. She truly enjoyed life and the people she met throughout her life.

Sister Vitalia was preceded in death by her parents, her brothers Michael and Stephen, and her sister Mary Hausman. In addition to her Sisters in community, she is survived by her devoted niece Barbara Akins. The Parastas Service will be celebrated on Friday evening, April 29 at 7:00 p.m. The Funeral Divine Liturgy will be offered on Saturday, April 30 at 10:30 a.m. by the Very Reverend Andrew Deskevich, Protosyncellus of the Archeparchy of Pittsburgh, with Rev. Michael Huszti as concelebrant.