A Young Adult Catholic Retreat was held at the House of Prayer at the end of May. Father Will Rupp of St. John the Baptist Byzantine Catholic Church, Hawk Run, PA, Kevin Barry, a Youth Minister of the Diocese of Greensburg/Connellsville Area Roman Catholic Churches, and Rachel Pawluszka, a Byzantine Catholic student at Drexel University, Philadelphia, directed the weekend program together with Sister Barbara Jean, OSBM.  Father Bob Lubic, Pastor, Connellsville Area Catholic Churches, was a guest presenter.  Attendees came from Western Pennsylvania and West Virginia.

The theme was “The Call to Discipleship” according to Pope Francis’ document, “The Joy of the Gospel.”  Each participant received a copy of the book as well as an examination of conscience based on the teachings of the document.  Conferences, small and large group discussions, social and free time, liturgical services and confessions formed the schedule. The retreatants joined the Sisters of St. Basil at the monastery for Sunday’s Divine Liturgy. Evaluations were very positive; the group requests another retreat weekend next year and plans to bring other young adults to experience a retreat at the Mount.  For more info, please call the House of prayer at 724-438-7149. 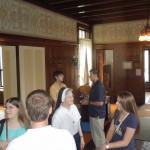 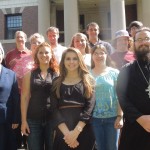 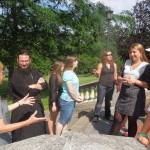