The Sisters of the Order of Saint Basil the Great are holding their XI General Chapter in Rome, Italy from July 8  to July 19, 2019.

The opening Divine Liturgy was held at St. Peter’s Basilica at the altar of St. Basil which has the body of St Josaphat enshrined in it. The Liturgy was celebrated by His Beatitude Sviatoslav and Bishop Dionysia and several priests.

The Opening Ceremonies started with  the singing of “Heavenly King” in Spanish, Slovak, Romanian, Spanish, Ukrainian and English followed by an official opening of the Chapter by Mother Dia Stasiuk, OSBM.

There are 43 international delegates representing 13 provinces, vice-provinces and delegatures. The meetings are being held at St. Josaphat Ukrainian Collegium in Rome, Italy.

In the afternoon language groups were formed to discuss how our gifts may be transformed into “New Wine” for the Order.

We invite everyone  to pray with us, asking God to send the Holy Spirit to inspire the Sister-delegates as they pray, discern, develop and prepare a vision and plan for the future of the Order and elect the members of the next General Administration to lead them on their journey. 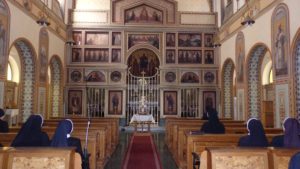 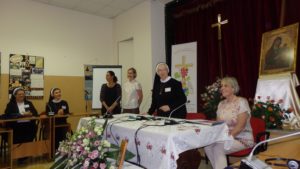 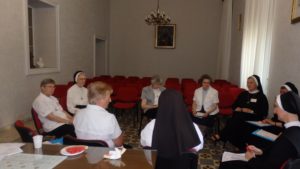