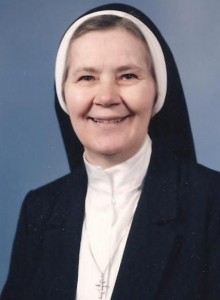 The heavenly ranks were increased in number on the prefestive day of the Entrance
of the Mother of God into the Temple. Early that morning of Nov. 20, 2012, Sister
Isidore made her own personal entrance into the eternal temple. As she was very
devoted to the Mother of God, it was a fitting day for Sister to complete her
earthly journey. The daughter of the late George and Marie (Romanko) Maruhnic, Sister
Isidore was born in what was then Czechoslovakia, and given the name Veronica
at baptism. She entered the Sisters of St. Basil from St. George Byzantine Catholic Church in Linden, N.J. on Feb. 15, 1947. Sister Isidore pronounced her First Vows on Dec. 9, 1948 and made her Perpetual Profession on Aug. 28, 1953 in the presence of the late Bishop Daniel Ivancho.

As a Sister of St. Basil for almost 66 years, Sister Isidore spent about half of
that time worked in culinary arts in the Monastery, at St. Basil’s Home, at Mount
Macrina Manor, or at missions throughout the Byzantine Catholic Metropolitan
Province of Pittsburgh. Other years were spent in the ecclesiastical sewing
department, lovingly putting to good use her talent in the making of vestments
and other ecclesiastical appointments. She eventually managed this department
before ill health required her retirement. Sister’s handiwork can be seen in
the many churches of our Metropolitan Province, giving evidence of her giftedness
and expertise.

One of Sister Isidore’s favorite activities during the many years that her ministry
placed her at the Mount was her daily walk to the Lourdes Grotto.  Often she was accompanied by one her friends among the Sisters, both of whom would be praying the Rosary as they walked along the way.  Later in the evening, Sister could be found praying in the Chapel. When she became a resident at Mount Macrina Manor a little over two years ago, the Chapel there was also one of her favorite places to be. Sister was very generous with her time in helping anyone who needed to have some sewing done; her kindness in this will not be forgotten by those who benefited from it. Sister Isidore was a very comfortable person to be with; one always had the sense that she was very much at home wherever she found herself. This quality is surely one that she carried with herself to her heavenly home.

Rather than eulogize the life of Sister Isidore, Father Eugene invited those present
to join him in a meditation on the fact of death.  Among other points he made, Father Eugene stated, “None of us know when he or she will die. The one who is most healthy
among us may go tomorrow; the most infirm may be present for all of our funerals. We don’t know.”  He went on to say that if we did know, for example, that we had a week yet to live, the thought of facing God would cause us, instinctively, to take inventory of our souls, and, whatever we would find lacking by way of virtue, we would certainly
seek to supply. “But our Divine Teacher has instructed us to live so every day,
with each succeeding day serving to increase our virtues both in quantity and
in quality.”

Especially during the last years of her life, Sister Isidore was aware that her journey
was coming to an end. She bore the discomforts and the pains of her last
illness without complaining and with patience, laying up for herself treasures
in heaven. She heeded the words of scripture quoted by Father Eugene during his
reflection, “Watch, therefore, for you do not know at what hour your Lord is to
come.” When the Lord did call her, Sister Isidore did not go before the Lord
empty-handed but bearing the beautiful virtues of simplicity, a deep faith, a
generous spirit and fidelity to her holy vocation.

Sister Isidore was preceded in death by her parents, her brother Peter and her sister
Anne (Staryak). In addition to her Sisters in community, she is survived by her
beloved sister Barbara Dellisante and several nieces and nephews. The Parastas
Service was celebrated on Fri., Nov. 20 by Rev. Michael Huszti, Monastery
Chaplain. Rev. Ronald Larko was in attendance. The Funeral Divine Liturgy was
celebrated by the Very Rev. Eugene P. Yackanich on Sat., Nov. 24 in the
Monastery Chapel. Concelebrants were Rev. Michael Huszti and Rev. Stephen
Wahal. In attendance were Rev. Jerome Botsko, Rev. Ronald Larko and Deacon John
Hanchin.  Interment followed in the Dormition Section of Mount Macrina Cemetery.

May God grant to his handmaiden,
Sister Isidore, eternal memory and peaceful repose.