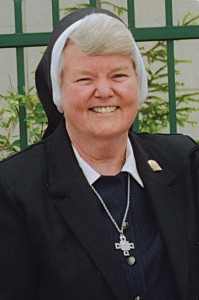 Recently I was asked: Why did you enter Religious Life?  Did you think about it when you were in high school?  Are you happy in this choice of vocation? Would you do it all over again now?  This, my vocation story, may help to answer these questions.

I attended public school in my early years from kindergarten to eighth grade and I had little contact with Religious Sisters except for when I made my First Holy Communion.  At the end of 8th grade, my Aunt Liz made a suggestion to me about attending Cathedral Catholic High School.  She felt that my parents would not be able to afford for me to keep up with the latest fashion trends in the public high school.  The uniform of the Catholic high school would alleviate this problem.  Not a noble reason, but I agreed to go.  Tuition was taken care of by my aunt, I passed the entrance exam, and this was to be the turning point of my life and the beginning of the journey of my religious vocation.

The Mercy Sisters from Plainfield, New Jersey taught at Cathedral High School.  Naturally, not knowing what the Sisters were like, I was nervous when I went on the first day.  I soon learned that they were prayerful, compassionate, sacrificial and good educators.

Mid-term of my first year brought a personal crisis.  My father was laid off and my aunt became ill. Both of these issues affected my tuition payments, and we could not take the mid-term exams unless half of our tuition was paid.  I spoke to one of the Sisters of this problem, and she told me not to worry.  I took the exams and later learned that Sister Victoria, my Latin teacher, had borrowed the money from her parents to pay my tuition.  The act of kindness touched me deeply.  There were 212 girls in my freshman class, and she extended herself to help me.

During the next few years the Sisters provided us with times for prayer: annual retreats, receiving the sacraments, and praying the Office of the Blessed Virgin Mary.  They involved us in social work as well.  I belonged to the Leaders Corp. We welcomed guests and made food packages and delivered them to the poor of the neighborhood.  Last of all, we had fun: dances, games, musicals and social get-togethers with the boys of the Trenton Catholic Boys School.

All through the first three years of high school I wanted to be a nurse.  In my junior year, I took a preliminary test for entrance into the St. Francis School of Nursing.  When I went for my interview with the director, Sister Pierre, she told me what I should study in my senior year.  Then she asked the strange question, “Did you every think of becoming a Religious Sister?”  No one had ever asked me that before.  I admitted to her that I had thought about it, but I pushed it to the back of my mind.  She told me to talk to someone about it.

My first thought was my Aunt Liz who suggested the Basilian Sisters at St. Mary Convent.  Sister Victoria agreed because I was Byzantine.  I made arrangements to meet Sister Frances Novak, OSBM.  While I waited for her, I could hear the Sisters laughing as they roller skated in the big basement of the convent. I thought, “they do know how to have fun!”

Sister Frances was most gracious.  She made arrangements for me to go to MountMacrina with Sisters Mark, Mildred and Dorothy Louise to attend their final profession in January.  While there I was edified by the prayerfulness, hospitality and kindness of the Sisters.  It ignited a spark in me to desire the Religious Life.

Sister Frances also encouraged me to go to the Pilgrimage, and again she arranged this.  I went and joined the huge crowd because Bishop Fulton Sheen was there.  I met with Reverend Mother Olga, and I was at ease because I went to school with her niece at Cathedral.  She told me of the many vocations from the Trenton parish, evoking a feeling of pride in me.

Upon my return home I learned that my father had collapsed at work and was hospitalized.  The doctors gave him only six months to live. Though my desire to enter religious life was put on hold, the grace of God became really strong in my life during this time.

My father was not a church going person, and he refused to receive the Last Rites.  No matter what we said, the answer was no.  It took a Sister to change his mind.  She was a Missionary Sister of the Sacred Heart who was an intern in her training there toward becoming a doctor.  On day when I went after school to see him, he said, “There is a Sister here who comes in with a smile on her face no matter what time of the day it is.  She is so gentle and kind when she puts the tube down my throat, maybe the Catholic Church isn’t so bad after all.  You can tell that red-headed priest (Father William Levkulic) he can come to see me.”  I thought, it took a smile and an act of kindness for this to happen.  That nun came into my father’s life and into my life as well.  I never saw her again.  My father fell asleep in the Lord six months later.  I was able to enter a year later as my brother Mike assured me that he would take care of my mom.

As I look back over fifty-four years, they have been both spiritually fruitful and joyful. I’ve been well educated.  I attended Carlow University in Pittsburgh, and I smile because one of my teachers there was my high-school prom date.  We had many nice talks of the good times we shared.  I pursued my Master’s Degree at the University of Dayton and there I met some of the Mercy Sisters who were my teachers in high school.

I’ve been a principal and teacher in schools from the Midwest to the East Coast.  Presently I’m in Pastoral Ministry for five parishes in northeastern Pennsylvania, visiting nursing homes, hospitals, and the home bound; leading liturgical singing; and still teaching catechetical classes on Sunday.  Again I smile, for one of the three priests in whose parish I minister, is my former third grade student.  This reminds me that you never know when or how the people who have influenced you or those whom you have influenced will cross your path again.

In conclusion, I’ll answer the final question: Would I do it all over again?  My answer would be a strong yes.  There have been difficulties, but the positives have far out-weighed the negatives.  Each day has been a gift from God, and He has been my rainbow in the storms of life.