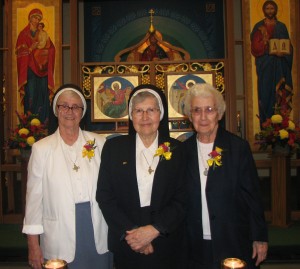 In this year, called for by Pope Francis as the Year of Consecrated Life, jubilees are an opportunity for all the Sisters to thank God for the gift of their vocation. After two days of presentations and discussion during their annual Community Days, the Basilian Sisters paused to honor three of the Sisters celebrating significant years of religious dedication.

Celebrating their 70th Anniversary of religious life were Sister Martha Elizabeth Moyta and Sister Leocadia Sevachko; celebrating her 60th Anniversary was Sister Barbara Swindells. The hallmark of every such celebration is the Divine Liturgy of Thanksgiving offered for the intentions of the Jubilarians. Joyful voices were raised in praise and thanksgiving for the gift of the fidelity of these three Sisters. This joy continued during the festive meal following, a time which is always punctuated by a lot of laughter and reminiscing.

Sr. Martha Elizabeth Moyta entered the Sisters of St. Basil from Holy Ghost Parish, North side Pittsburgh, Pa. She received her Bachelor of Science degree in Elementary Education from College Misericordia in Dallas, Pa., and a Master of Science degree in Religious Education from LaSalle University in Philadelphia, Pa.  Sr. Martha Elizabeth spent almost 25 years in elementary education before being assigned to the Diocesan Religious Education Office in Pittsburgh, Pa. During her years in this ministry, Sister worked with others on the “God With Us” catechetical series where her expertise was methodology. Following her years in religious education both in the Pittsburgh Archeparchy and the Eparchy of Parma, Sister Martha moved on to pastoral ministry in St. Therese parish in St. Petersburg, Fla. before retiring to the monastery at Mount St. Macrina.

Sr. Leocadia Sevachko entered the Sisters of St. Basil from St. Nicholas parish in Youngstown, Ohio. She received her Bachelor of Science in Education degree from Carlow College (now Carlow University) in Pittsburgh, Pa., and her Master of Science in Education from LaSalle University in Philadelphia, Pa. Sr. Leocadia’s teaching assignments spanned 57 years in elementary education. Her assignments also included a number of years when she served as both teacher and principal. The first to enter the community, Sr. Leocadia has the distinction of being one of three sisters in community; Sr. Dorothy, now deceased, and Sr. Bernarda. With her sister, Sr. Bernarda, Sr. Leocadia continues to serve in catechetical and parish ministry in the five parishes in the Youngstown area.

Sr. Barbara Swindells entered the community from St. Mary Church in Chicago, Ill. She earned a Bachelor of Arts.in Secondary Education in 1968 from Mount Mercy College in Pittsburgh, Pa., and a Master of Arts in History from John Carroll University in Cleveland, Ohio. For 23 years, Sr. Barbara’s energy was devoted to education from the elementary level through high school; at times serving as principal or assistant principal. Following these years, Sister engaged in ministry in the Religious Education Office of the Archeparchy as well as in the Eparchy of Van Nuys. She was elected to the Provincial Council in 2000 and was re-elected to a second five-year term. Presently Sr. Barbara is the Administrator of Mount St. Macrina Cemetery and Mausoleum, a position she has held since 2001.

For the combined 200 years of faithful service, warm congratulations were offered to the Jubilarians by Sr. Ruth Plante, Provincial, and by all the Sisters. May God grant them many more spiritually fruitful, happy and blessed years!