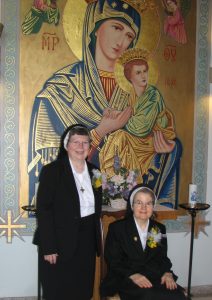 The Sister of Saint Basil of Our Lady of Perpetual Help Province, Uniontown, Pa. recently honored their Sisters who were observing jubilees and significant year anniversaries.  On Sun., July 24, 2016, the Sisters, their associates, families and friends gathered in the monastery chapel as Metropolitan Archbishop William C. Skurla celebrated a Divine Liturgy of thanksgiving for Sr. Stephanie Bavol, OSBM a 75-year honoree and for Golden Jubilarians Sr. Janet Decker, OSBM and Sr. Joanne Lickvar, OSBM.  Sr. Stephanie, a resident at Mt. Macrina Manor, was unable to be present.

In his homily Metropolitan William spoke of the faith that can move mountains.  Situations that seem impossible or insurmountable can be overcome with determination, faith, prayer and fasting.  With faith, life changes the way that people think and they come closer to Jesus Christ.

Metropolitan William congratulated Sisters Stephanie, Janet and Joanne and thanked them for their lives of service to the church, for all those whom they taught, and for the countless lives that they touched.

After the liturgy, the celebration continued with a festive dinner in the monastery dining room.

St. Mary Church in Trenton N.J. was the home parish for Sr. Stephanie. As a very young Sister, she remembers an early ministry in the residence of Bishop Basil Takach.  Her specialty in teaching was the primary grades for twenty-five years.  She then developed her talent for iconography and art design, and she became an accomplished and well known iconographer.  The icon that she wrote depicting the Call of the Apostles became the vocation icon for the Eparchy of Passaic.

Sr. Janet entered the community from Saints Peter and Paul Church in Lopez, Pa.  Her years of ministry were mainly dedicated to education as a teacher and principal. After St. John School in Wilkes-Barre, Pa. was closed, Sr. Janet continued to serve there in pastoral ministry.  Presently she serves as assistant at the Cemetery Office, and she offers her clerical and organizational skills wherever needed.

Sr. Joanne came to the Sisters from St. John the Baptist Parish (now the Cathedral Parish) in Cleveland, Ohio. She, too was, committed to education as teacher and principal in schools staffed by the Sisters.  She served the community as education consultant and when assigned to the chancery in Phoenix, she worked for the eparchy in the finance office and as coordinator of the Safe Environment Program.  The years from 2007 to 2013 found her in Rome after being elected Vicar General for all of the Sisters of the international Order of the Sisters of Saint Basil.  She was elected to the Provincial Council in 2015, an office she holds today. 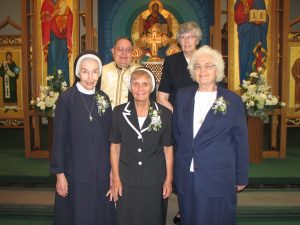 Saint Michael in Donora, Pa. is the home parish of Sr. Emma Pauline Fedorchak OSBM. She likewise was dedicated to the ministry of teacher and principal for many years.  Then for a long while she was appointed to pastoral ministry at St. George parish in Linden, N.J. Upon her return to the monastery she devoted time as a volunteer at Mt. Macrina Manor, visiting the sick and offering comfort to them.

Lansford, Pa. was home for Sr. Leona Trudich OSBM, and St. John Church there was her parish.   She offered her services in various parochial schools as teacher, principal, and in later years, as library aide.  With Sr. Leonora she served in pastoral ministry at St. John in Hazleton, Pa. until that ministry was discontinued.  Her retirement years have been devoted to the ministry of prayer.

Sr. Euphemia Kopa OSBM joined the Sisters from St. Mary Parish in Weirton, W. Va.  Following the prime apostolate of the Sisters at that time, she too was a teacher and principal.

Many former students can remember her as their second grade teacher.  She also served in the bishop’s residence and as administrator of the former St. Basil’s home. She has worked as assistant to Sr. Vladimir in the monastery baking department and the medovniki project for the Pilgrimage, a ministry which she continues today.

Sr. Leonora Kondrach, OSBM entered from St. Mary Parish in Freeland, Pa.  Most of her 60 years as a Sister were devoted to the apostolate of education as both teacher and principal.  When St. John School in Hazleton, Pa. was closed, Sr. Leonora continued there in pastoral and catechetical ministry.  Then she helped as a teacher’s aide at St. Mary School in Cleveland, Ohio, and at the House of Prayer at Mount St. Macrina.

Sr. Jean Marie Cihota, OSBM came from St. Nicholas Parish in McKeesport, Pa. She has been dedicated to the ministries of elementary education, religious education, pastoral ministry, community administration as assistant provincial, and vocations.  She has also fulfilled appointments as Assistant Director of Vocations for the Archeparchy of Pittsburgh and as a member of the Intereparchial Vocations Commission. Since 2006, her ministry has been in the chancery of the Eparchy of Phoenix where she is also the Eparchial Safe Environment Coordinator.

Sr. Josetta Kriss, OSBM left her home parish of St. Michael in Canonsburg, Pa., when she answered the call to the consecrated life.  Many of her years of ministry were devoted to educating children both as teacher and principal in the parochial schools of the Archeparchy and of the Eparchies of Parma and Passaic.  She was also named as Provincial Counselor, Province Treasurer and as director of the Byzantine Seminary Press in Pittsburgh.

The parish of Sts. Peter and Paul in Warren, Ohio is the home parish of Sr. Margaret Fedyszak OSBM.  Her ministerial specialty was culinary arts at the monastery, Sts. Cyril and Methodius Seminary, the former St. Basil’s Home, and at various convents of the Metropolitan Church.  She is a certified massage therapist, and she has offered that talent at Mt. Macrina Manor, where she also worked in the Activities Department.