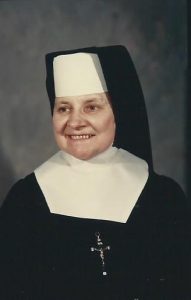 On the morning of August 4,2016, Sister Vladimir (Mary) Chabala made the final surrender of her life to the Lord in whose service she spent herself for over 70 years. Until the last two weeks of her life, Sister was a familiar figure around the monastery, and most frequently, she could be found praying at her place in the chapel. Her poor health in her later years did not prevent Sister from either doing what she could or from carrying out the duties of her religious vocation.

Sister Vladimir was born in the village of Kobylnice in Slovakia, the daughter of the late John and Helen (Onufer) Chabala. She entered the Sisters of St. Basil from St. Mary’s Church, New York, N.Y.   Sister brought to the Community her special gift in the culinary arts, which she generously offered in service to the community.  Besides caring for the Sisters’ needs in the various parishes of where the Sisters served, Sister Vladimir also worked at St. Basil’s Home for Aged Women, at Maria Manor in Ebensburg, PA and at the Archbishop’s Residence in Pittsburgh, PA.

In addition to baking throughout the year, Sister Vladimir brought her unique abilities to the “medovniki” project for the annual Pilgrimage. Over the years, Sister Vladimir fine-tuned this particular ministry down to its minutest details, and all were in awe of her skills in organizing this project. In fact, for this last round of baking, she still oversaw the preparation of icing.  For many years, Sister also added another flavorful touch to the Pilgrimage through overseeing the preparation of the “holupki” (cabbage rolls) which are a popular item with the pilgrims. When Sister Vladimir was no longer able to do this, she was consulted and then gave her stamp of approval to the caterers who now make this ethnic treat.

Sister Vladimir was also responsible for preparing the Holy Chrism which is consecrated for use in all of our churches, another ministry to which she was devoted for quite a number of years. Much more could be said of Sister, whose life journey took her from her small village in Slovakia, to New York City where she worked at Schrafft’s to Mount St. Macrina. In summary, her simple life of loving labor and prayer has enriched many lives, and she now enjoys her well-deserved heavenly reward.

The last surviving member of her immediate family, Sister Vladimir was preceded in death by her parents, her brothers Michael and John and her sisters Anna Evan and Sister Olga, OSBM. In addition to her Sisters in community, she is survived by several nephews and nieces and their families. Relatives and friends will be received at the Monastery Chapel on Wednesday, August 10 from 3:30 pm to the time of the Parastas Service which will be sung at 7:00 pm. Visitation will continue afterwards until 8:00 pm. The Funeral Divine Liturgy will be celebrated at 10:30 am on Thursday, August 11 in the Monastery Chapel by Archbishop William Skurla. Interment will follow in the Dormition Section of Mount Macrina Cemetery. Stephen E. Kezmarsky III Funeral Home, Uniontown, is in charge of arrangements.