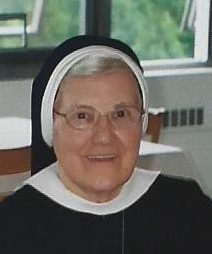 In the early days of the community, Sister Paula would awake from sleep to prepare for morning prayer in the Monastery. On the morning of April 28, she awoke instead to a new life, a life where she was welcomed into the embrace of the Lord she served so faithfully for over 70 years.

Sr. Paula (Anna) Dzurisin was born in Pittston, Pa., the daughter of the late George and Mary (Kizlin) Dzurisin.  A member of St. Michael’s Byzantine Catholic Parish in Pittston, Pa., she entered the Sisters of St. Basil the Great on June 23, 1947. Sr. Paula made her Final Profession of Vows on August 28, 1953 in the presence of the late Bishop Daniel Ivancho.

As with many of those who entered at the time, Sr. Paula spent a good number of years as a teacher and principal in the parish schools of the Metropolitan Province of Pittsburgh. She also taught business courses at Mount Macrina Academy.  There for only one year, the impression she made was such that her students were sure to visit her during the Alumnae reunions.

After almost a half century in the teaching ministry, Sr. Paula returned to the Monastery where she spent a year volunteering in pastoral visiting at the Manor. She was a great conversationalist, and her interest in people was mutually enriching in this ministry.

Her background in business education, however, led to her next assignment, that of managing the Card Department at the monastery for the next eight years. When it was necessary to lessen her responsibilities, Sr. Paula continued to assist in that same ministry for another eight years, graciously handing over the management to another Sister. It was only after this full life in active ministry that Sr. Paula was admitted to the Manor due to declining health.

In her vocation story, Sister wrote that her response to God’s call came only after she repeatedly would say, “No, this isn’t for me, but the call continued to haunt me.”  Having finally said “Yes” to her call, she wrote, “The lived experience of my call became like a precious container filled with love that increased the desire within me to share this love with others. This wonderful gift, my Vocation, has been, is, and will continue to be an exciting challenge for me to live my life to the fullest.”

Sr. Paula was preceded in death by her parents, her brothers Rev. Monsignor George, Joseph, Michael, and John and her sisters, Sister M. Philip and Mary Wascavage.  In addition to her Sisters in community, she is survived by her brother Paul (Dorothy) and many devoted nephews and nieces.

Relatives and friends will be received at the Monastery Chapel on Wed., May 2 from 3:30 p.m. to the time of the Parastas Service which will be sung at 7:00 p.m. The Funeral Divine Liturgy will be celebrated by Archbishop William C. Skurla on Thurs., May 3 at 10:30 a.m. in the Monastery Chapel. Interment will follow in the Dormition Section of Mount Macrina Cemetery.