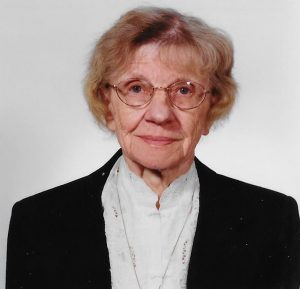 Having fallen asleep in the Lord late in the evening of April 11, 2018, +Sister Maria Petruska (formerly Sister Juvenalia) woke to a new dawn in the heavenly kingdom. In the last years of her life, Sister was a resident at Mt. Macrina Manor, and it was from here that she took her final steps into eternity.

The daughter of the late Andrew and Mary (Ciparik) Petruska, Sister Maria, was born in the village of Ruska Nova Ves in what is now Slovakia. She entered the community from St. Mary’s Byzantine Catholic Church in Mahanoy City, PA on January 15, 1942 and made her Final Profession of Vows on January 8, 1950.

Her active life in ministry was comprised of teaching from the elementary to secondary levels within the Pittsburgh Metropolitan Province. At the college level, she taught at the Fayette Campus of Penn State. Her teaching ministry on the college level then led her to seek broader experiences, taking her to Bethlehem University, to Guam, Japan and Tanzania. Her experiences of teaching in foreign countries were among her fondest memories.

Retiring from this active ministry, Sister Maria then became involved as a tutor at the Intermediate Unit I Adult Learning Center in Uniontown. Because of her teaching experience in foreign countries, Sister Maria stated that the choice to tutor for the learning center came naturally. As a native of Slovakia, she had an empathy for those lacking proficiency in English. For her, teaching English as a second language was a joy, not a job. Some of the friends she made through this work kept in contact with her over the years.

Sister Maria was preceded in death by her parents, her sisters, Helen and Margaret Petruska, and her brothers, Rev. Gregory Petruska and Andrew Petruska. In addition to her members in community, she is survived by her brother, Rev. Christopher Petruska and her sister Theresa (Bill) Ortmann.

Relatives and friends will be received at the Monastery Chapel on Wednesday, April 18 from 3:30 p.m. to the time of the Parastas Service which will be sung at 7:00 p.m. The Funeral Divine Liturgy will be celebrated on Thursday, April 19 at 10:30 am in the Monastery Chapel by Archbishop William C. Skurla. Interment will follow in the Dormition Section of Mount Macrina Cemetery.