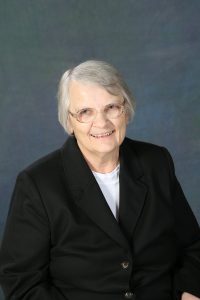 The daughter of the late Michael and Mary (Hrinda) Millow, Sister Helen was born in Scranton, Pa. She entered the Sisters of St. Basil the Great from St. John the Baptist Church in Scranton, Pa., on October 1, 1964 and made her Final Profession of Vows on August 6, 1972.

A graduate of Technical High School in Scranton, she was the valedictorian of her class of 400, an achievement that was not widely known beyond her family.  She was employed by the Dun and Bradstreet Agency for six years prior to her entrance into religious life.

As a Sister, she earned a B.S. degree in education from Marywood University which benefited her as she began her ministry in religious life, serving as teacher and then also principal in several of the schools staffed by the Sisters throughout the Metropolitan Church of Pittsburgh. From 1980 until 1997, Sister Helen was the monastery coordinator, assistant treasurer and treasurer of her Province of Our Lady of Perpetual Help.

From 1995 to 2005 she worked with the staff of the Eparchy of Parma as assistant eparchial finance officer.  Upon the completion of this assignment, she returned to the monastery and continued to capably fill the office of Province Treasurer, until her illness brought her to a short time of retirement.

Her extensive knowledge of finances, insurance and investments was a great asset in her role as capable treasurer both for the community and the Eparchy of Parma. She will be fondly remembered for her love for and fidelity to her Basilian community.

Sister Helen was preceded in death by her parents and her brother Michael. In addition to her members in community, she is survived by her sisters Mary Ann McLaughlin (+Charles), Anna Mae (Stanley) Lehman, Jean (Kenneth) Morgan, her sister-in-law Bernadette Millow and nieces, nephews, grand-nieces and grand-nephews.