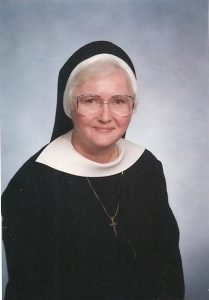 Early in the evening of Monday, December 14, 2020, Sister Emma Pauline (former Sister Hilaria) fell asleep in the Lord at Mt. Macrina Manor. In two weeks, she would have observed her 100th birthday. The Lord Jesus, however, chose a better “birthday” for her, this one to be celebrated in His Kingdom.

Sister Emma Pauline was born in Donora, PA, the daughter of the late Michael and Anna (Oras) Fedorchak. She entered the community from St. Michael’s Byzantine Catholic Church in Donora, PA on September 27, 1936 and made her Final Profession of Vows on April 23, 1946.

For a little more than 40 years, Sister Emma Pauline was engaged in catechetical and elementary education as her main ministry. With two degrees in this field, she was especially gifted in teaching the youngsters in the primary grades. One of her students from those years, still remembers her fondly. He credits Sister with forming him in the faith from the time she prepared him for First Communion.

At the juncture of halfway through her ministry, Sister Emma Pauline’s energies shifted to pastoral care, volunteering for three years at Mt. Macrina Manor, then seven years at St. George Byzantine Catholic Church in Linden, NJ.  The late Monsignor George Billy was pastor at St. George’s. He later became a resident at the Manor, and Sister was very faithful in visiting him during her time in pastoral ministry. Her care for Monsignor was deeply appreciated by his family, as she was so well known to them.

In 1996, Sister returned to the Monastery, and shortly after began to volunteer again at Mt. Macrina Manor until 2002 when she retired from active ministry. Sister’s final years of life were spent as a resident at the Manor.

Sister Emma Pauline was preceded in death by her parents, her brother Leonard, and her sisters Irene Womeldorf, Helen Lisante and Anna Ramult, She was the last surviving member of her immediate family.

Rev. Jerome Botsko, Monastery Chaplain will celebrate the Funeral Divine Liturgy in the Monastery Chapel on Friday, December 18. Rev. Stephen Wahal, pastor of Sister’s home parish in Donora, will concelebrate. Due to the pandemic, there will be no public viewing.

Crawford Funeral Home in Hopwood is in charge of arrangements.