SISTER FABIAN KRASSA ENTERS INTO THE FULLNESS OF LIFE

SISTER FABIAN KRASSA ENTERS INTO THE FULLNESS OF LIFE 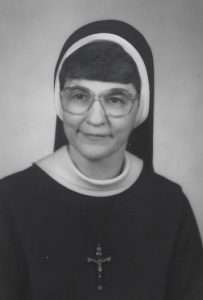 Sister Fabian (Margaret) Krassa was born in Uniontown, PA, the daughter of the late Stephen and Mary (Huston) Krassa. She entered the Sisters of St. Basil from St. John’s Byzantine Catholic Church in Uniontown, PA on September 15, 1950 and made her Final Profession of Vows on January 1, 1956 in the presence of the late Very Rev. George Bonchonsky.

Her ministry experience was largely focused on education, both as a teacher and principal. After 40 years of dedication to this ministry, Sister Fabian was granted her desire to serve in Rome, Italy. There she worked for seven years in the library of the Pontifical Oriental Institute. Of her time there, Fr. Gick, S.J. wrote: “I have found her to be honest and generous in her approach to her work, but more importantly, she had demonstrated a  high degree of loyalty and trustworthiness in her work . . . and has carried out her obligations with care and precision.”

While enjoying her work at the Institute, Sister’s great joy in being in Rome was the many opportunities she had to attend the audiences of now St. John Paul II.

Upon her return to the monastery at Mount St. Macrina, Sister Fabian assisted part time with keeping the Monastery Archives and other clerical duties as were asked of her. When her health no longer permitted this, Sister became a resident at Mt. Macrina Manor, from where she was called home to the Lord.

Writing about her vocation, Sister Fabian noted that it was her parents’ faith and devotion to Christ that finally led her to Religious life. She remembered telling her mother that if she were a boy, she would be a priest. When she was in the eighth grade, the death of her pastor was another event that influenced her life choice. At the end of his funeral, she had the strong sensation that God was calling her to the religious life, giving her his vocation in a sense. After this incident, there was never any doubt in Sister Fabian’s mind about her call. This was made even firmer in high school when a Franciscan priest became the pastor at St. John’s and had parish missions that nourished her desire to be a Sister.

What Sister Fabian enjoyed most in her life was bringing Christ to others through the teaching apostolate. After being sent out to teach, she found that she received even more than the hundredfold promised by Jesus through the important events and relationships she encountered.

In July, Sister Fabian celebrated her 70th Anniversary as a Sister of St. Basil confirming her initial desire to give her life to God, serving however and wherever she was called. We can rejoice with her, trusting that Sister Fabian is now face to face with Jesus, her Divine Spouse.

Sister Fabian was preceded in death by her parents, her brothers, Jimmy, Michael, Steve, Andrew, Adam and John, and her sisters Anne, Mary (Hudock), and Helen (Zahuranic). In addition to her Sisters in community, she is survived by her sister Pauline Monakee and devoted nieces and nephew.

The Divine Liturgy will be celebrated privately in the Monastery Chapel on Saturday, December 12 by Rev. Jerome Botsko, Monastery Chaplain. Very Rev. Ronald P. Larko, pastor at St. John’s will concelebrate. Due to the coronavirus restrictions, there will no public viewing.