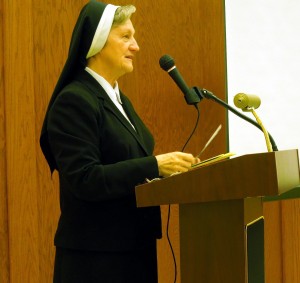 Sister Barbara Jean Milhalchick, OSBM spoke recently at St. Joseph Byzantine Catholic Church on the topic of “Breathing with Both Lungs: One Church, East and West” as part of the Adult Catholic Education Faith Formation Series, Cleveland Area.  Sister was asked to address this topic because Roman Catholics tend to have a limited understanding of the over 20 million fellow Catholics who belong to a variety of non-Roman Catholic churches which are in full communion with the Bishop of Rome.  Sister Barbara Jean elaborated on the history, spirituality and forms of liturgical celebration of various Eastern churches but especially of the Byzantine Ruthenian Catholic Church.

Pope John Paul II repeatedly challenged the whole Church to “breathe with both lungs” of both Western and Eastern Christianity.  The evening included the DVD “A Brief Explanation of the Eastern Catholic Churches” produced by the Eparchy of Parma and a question and answer session. About 110 people attended from both Eastern and Western Catholic Churches.