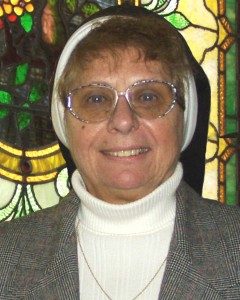 As I reflected upon the journey of my call to religious life, there were many mini revelations of God’s invitation.  No, there were no loud ringing of bells or drum rolls, but the quiet unfolding presence of our Lord, speaking at times through various significant persons in my life.   Although there were many such persons, I wish to share the stories of three of these and of the impact of their presence in my life.

Memories of many summer vacations in Mingo Junction, Ohio spent with my Baba (Grandmother) flood my mind and heart.  Baba never really spoke much in English to me but in her Slovak language and more importantly in her daily witnessing of God’s love and presence in her life, she spoke volumes.  She accepted my awkward manner as I tried to assist her in mixing the ingredients for bread.  As the loaves were prepared for the oven, she blessed the bread with a sign of the cross.  The aroma of the baking bread filled the home with such delight.   Later in the day, when we were about to taste the marvels of our endeavors, before she cut the bread, once again she signed the bread with a cross.

Another memory I feel compelled to share about Baba was her love and respect for the land.  I guess to me at a very early age, it just seemed like a lot of dirt, in which I enjoyed making mud pies at play.   But as Baba prepared the land for the planting of the garden that yielded a magnificent array of various vegetables, she would prayerfully take the hoe, and once again bless the ground in the form of a cross before she ever would think of placing the seeds into the holy and sacred ground.

These early memories of God’s presence through her presence made such lasting spiritual impressions upon me.  I truly believe that through her holy presence she confirmed the seed of a vocation to religious life into my being.

It seems that my childhood days did not linger for a very long period of time.  I soon found myself growing into a youthful teen with all the excitement and challenges that such a time of a teen’s life could imagine.  There were the struggles with acne, studies, dating, to name only a few, but most importantly the search for a best trusted friend.  At last, when I went to Mount St. Macrina Academy, a big sister was appointed to keep me in the right direction.  She truly was a woman of wisdom, far beyond her years.  Carol was two years older than I, and even after she was graduated, we remained best friends.

Our senior play was entitled “Career Angel.”  No, I was not the angel, by any means.  But Carol loved the arts and more importantly she wanted to see our Senior class in dramatic action. Shortly after all the applause at the conclusion of the performance, she met me in the back of the stage with tears in her eyes.  I thought “Wow, we really put on a great show.”  But no, they were tears of sorrow. She recently had received news that she had leukemia and that her days on this earth were numbered.   The emotions fostered through the success of our performance of “Career Angel” suddenly were all mixed with sorrow, sadness and confusion.  We held each other and cried together.

Two months later, on a bitter cold December day in 1954, Carol was in the ColumbiaHospital in Pittsburgh, and I was most eager to visit my very dear friend.  As I was about to enter her room, I could hear the sobs of her parents, and then I knew why.  There, surrounded by an array of tubes and hospital apparatus lay my very emaciated friend.  Her parents excused themselves, and I tripped over appropriate words.  All that could find their way to my lips were, “Carol, you look awful.”  (No pastoral presence on my part, right?)  I realized the insensitivity of my words and tried to cover them up with, “You must be suffering and in such pain.”

Her prayerful and thought- provoking response was, “Jeannie, I am not suffering.  There is only one suffering in our lifetime, not to respond to what God is asking of us.  I am at peace in accepting His will.”   Carol died about three weeks later.  Her message is stamped on my heart forever.

In the beginning of this reflection, I mentioned that our Lord uses many persons in our lives, as He reveals His love to us.  My Baba and Carol surely were God’s inspirations to me.  Even though there have been many other significant persons in my life whom God had chosen, this last person spoke out loud and clear.  The time was after I was graduated from high school and was truly searching God’s will in my life, especially after the death of Carol.

A fine young gentleman who was in pre-med school from St. VincentCollege in Latrobe was also in the immersed in his search.  We had been dating for some time, and one evening we had gone up to Mount Washington in Pittsburgh.  It was a beautiful night.  The weather was perfect, considering Pittsburgh; the stars were sparkling; the Three Rivers as viewed from Mount Washington were dancing as the moon lit the evening;  our conversation was insightful and then … the following statements and questions started to flow:

“I have a very important question to ask you,” Alphonso spoke thoughtfully.  I fumbled with my ring finger thinking, “I’m not ready for marriage.  I’m not sure where God is leading me.”

And then he intensified his voice again, “I have a very, very important question to ask you.”  My heart was really pounding now! He continued, “Have you ever seriously thought about being a nun?” And then, like a ton of bricks, it hit me … I felt like the Hound of Heaven finally was heard – loud and clear!

Early in my life I dreamed of getting married and having at least a dozen children. Now that I am espoused to Christ and His Church, I have at least a thousand children from coast to coast.  In fact, one of my students from my first year of teaching in Johnstown, Pa. in 1960 – Kathy Slonka – is the editor of Light of the West [the eparchial newsletter].  We minister together here in the Eparchy of Phoenix.

Today, 55 years later, I continue to thank God for not giving up on me.  And I thank Him daily for the gift of His presence totally in my life.  I remain ever grateful to my parents, my brother and sisters, the multitude of nieces and nephews, great nieces and nephews and for my extended family of the Sisters of St. Basil the Great.

Mount St. Macrina continues to be a spiritual lifeline for me.  My father spent many weeks of his vacation to assist at our annual Pilgrimage to Our Lady of Perpetual Help. Last year, my great nephew, Elijah traveled from Jakarta, Indonesia to experience his first Pilgrimage.    Every now and then the Lord sends someone to again remind me of His miracles of love that abound all around me.  With a grateful heart, I utter “Thank You” for them and for the gift of the vocation to religious life to which He has called me.