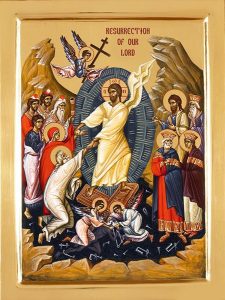 Christ is Risen from the dead,

by death He trampled Death

And to those in the tombs,

Let all pious men and women and all lovers of God rejoice in the splendor of this feast; let the wise servants blissfully enter into the joy of their Lord; let those who have borne the burden of the Fast now receive their pay, and those who have toiled since the first hour, let them now receive their due reward; let any who came after the third hour be grateful to join in the feast, and those who may have come after the sixth, let them not be afraid of being too late; for the Lord is gracious and He receives the last even as the first. He gives rest to him who comes on the eleventh hour as well as to him who has toiled since the first: yes, He has pity on the last and He serves the first; He rewards the one and praises the effort….