Home/Uncategorized/Christmas Preparation Days at House of Prayer
Previous Next 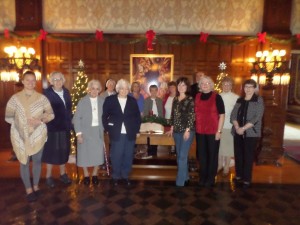 Some of the Sisters and the Affiliates, and a few others, came together at the Mr. St. Macrina House of Prayer in Uniontown, Pa., on Sunday afternoon, December 13, 2015, for a Christmas Preparation Retreat. The House of Prayer, directed by Sr. Carol Petrasovch with assistance from Sr. Barbara Jean Mihalchick , is just one of the many works of mercy and piety run by the Sisters on their extensive property. Besides the monastery itself and the House of Prayer (which was the original monastery), they have a nursing home and a cemetery, and hostels for pilgrims who come for their annual Labor Day pilgrimage, and well as a gift shop. Shrines dot the landscape, and it seems that little coverts for prayer are everywhere. There was a Live Nativity on the grounds getting underway that day after the retreat.

The Sisters had invited Archimandrite George to speak to the group. He said he came with two main ideas to share, the first being the opening of Matthew’s Gospel, in which four women, all of whom had a whiff of scandal, if not outright sin, about them, and they still became ancestors of Jesus. The point being, God can still do great and wonderful things even with flawed people.

The second point had to do with the Word becoming flesh. Why? He proposed that God wanted a hug. We can wrap our arms around thin air all day long—and God, who is everywhere, would be in that embrace—but we know that human beings much prefer a tangible hug, the actual feel of another person. And so God “translates” the divine spiritual reality into the living language of humanity: the Word becomes flesh, and lives among us; even now, in the Eucharist.

The pilgrims had an opportunity to make Confession, and then concluded their prayers with a moleben in preparation for Christmas. The day was topped off with a lovely supper prepared by Sr. Carol.