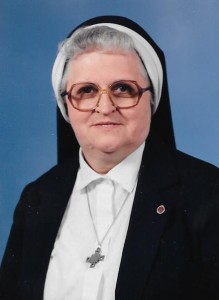 Sister Eleanor Mary (former Sr. Vincentia) fell asleep peacefully in the Lord on Tuesday evening, December 8, 2015. As she had attended the Divine Liturgy earlier that day, and although she was having some discomfort, no one expected that this would have been her last day among us.

The daughter of the late John J. and Mary (Petro) Horvath, Sister Eleanor Mary was born in Pottstown, Pa. She entered the Sisters of St. Basil from St. John the Baptist Byzantine Catholic Church in Pottstown, Pa., on June 20, 1948. She pronounced her First Vows on August 15, 1950, and made her Perpetual Profession on January 1, 1956, in the presence of the late Very Rev. George Bonchonsky.

For many of the 67 years of her religious life, Sister Eleanor Mary served in culinary arts for the community in the missions in New York, New Jersey, Indiana, Illinois, and Pennsylvania; at the Byzantine Catholic Seminary, at St. Basil’s Home for Women and at the monastery in Uniontown. Her interest in the culinary arts led her to participate in Galand’s World – A Chef’s Perspective to Cooking, as part of the Continuing Education offered by the Pennsylvania State University for three consecutive years.

Sister Eleanor Mary’s ministry underwent a change in 1986 when she became a familiar and pleasant figure in the Card and Prayer Department at the monastery. She would process the incoming mail and take care of keeping the files in order. Sister was assiduous in filling orders, packaging them, and assuring that they would be mailed in good time. She found great joy in doing this, and her dedication often led her to stay longer than was expected of her.  As an “extracurricular” activity, Sister Eleanor Mary accompanied Sister Dolores Ann to the regular meetings of the Multiple Sclerosis Social Club of Fayette County. She offered her services in sending greeting cards for various occasions to the members, and she was so cheerful in doing this that she was named an honorary member and the “Sunshine Girl” of the club. She continued her participation even while she was at Mount Macrina Manor where the meetings were held for some years.

Sister Eleanor Mary was preceded in death by her parents, her brothers Daniel and John Jr., and her sister Patricia Hassar. In addition to her Sisters in community, she is survived by her nieces, cousins and their families. Relatives and friends will be received at the Monastery Chapel on Friday, December 11 from 3:30 p.m. to the time of the Parastas Service which will be sung at 7:00 p.m. Visitation will continue afterwards until 8:30 p.m. The Funeral Divine Liturgy will be celebrated on Saturday, December 12 at 10:30 a.m. in the Monastery Chapel by Archbishop William Skurla. Interment will follow in the Dormition Section of Mount Macrina Cemetery. Stephen E. Kezmarsky III Funeral Home, Uniontown, is in charge of arrangements.