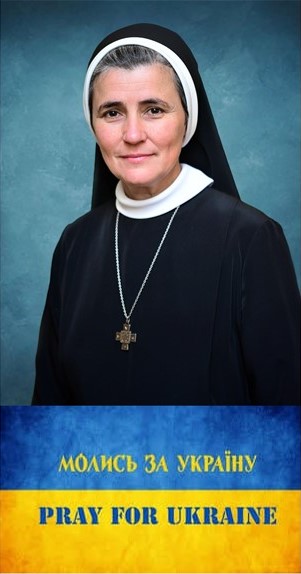 He who dwells in the shelter of the Most High will rest in the shadow of the Almighty. I will say of the LORD, “He is my refuge and my fortress, my God, in whom I trust.” (Ps 91:1)

I am sending you this letter on the sixth day of shocking and unjustified aggression of Russian Federation military forces against Ukraine and Ukrainians. You are facing this trial with great dignity.

On February 12 the entire Order prayed for peace in Ukraine and as we lifted our eyes to the hills we testified together that our “help comes from the Lord” (Ps 121, 2). The Basilian Sisters from around the world continuously turn their eyes to the one who is our refuge and shelter. Every day and every night together with many other men and women of prayer we are creating a prayer shield for those in danger.

Dear Basilian Sisters in Ukraine, I am so grateful that you continue to be prayerful, healing and life-giving presence of God in your country, in all the cities and villages where you live, pray and serve. Thank you for bringing hope, trust in God’s providence, mercy and love to those who need it.

War, hatred and murder are obvious and bold-faced expressions of evil. Evil is a devastating force that destroys life, relationships and the soul. Dear Sisters, let us continue our prayers for peace. This is a time full of terror, blood, tears and cruelty but it is already clear how courage, love, mercy, truth, mutual aid and kindness are manifested as bright lights in the darkness….

Spiritual giants are born in the greatest of trials. Even at this time, the night of Gethsemane, and perhaps Golgotha, the Lord leads us to the resurrection. Therefore, dear Sisters, I entrust you with the care of the physical and spiritual life of all those who ask for help. Let us not allow fear, bitterness, hatred, which will try to block this light to win and destroy you.

In the time when we are about to begin the Great Lent I am finishing my letter by the lines that show what is our destination, the destination where Ukraine is headed. “Let God arise and let his enemies be scattered, and let those who hate him flee from before his face. Christ is risen from the dead, by death trampling death, and to those in the tombs granting life!” 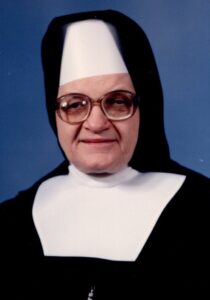 The oldest living member of the Sisters of St. Basil, Sister Mary Ann entered into eternity on Wednesday, January 5, 2022.  Her long journey of 78 years as a Sister of St. Basil ended as she stepped into new life.

Sister Mary Ann (Elizabeth) Vasilcheck was born in Struthers, Ohio, the daughter of John and Susan (Ondovcin) Vasilchek. She entered the Sisters of St. Basil in Uniontown on May 14, 1944 and made her Final Profession of Vows on April 4, 1954 in the presence of the late Rev. Fr. Bernardine Hvizdos, OFM.

Sister Mary Ann’s years of ministry were largely spent as a home Sister in the various parish missions staffed by the Sisters. She also enjoyed teaching religion to younger children, and several years and many of her summers were taken up with this ministry. In addition, Sister served at the Bishop’s Residence in Pittsburgh and at St. Basil’s Home in Uniontown.

Following her service at St. Basil’s Home, Sister Mary Ann retired to the monastery, where she assisted wherever she could. In addition, from 1997 until 2005, Sister Mary Ann was a faithful volunteer at Mt. Macrina Manor. As her health declined, the Manor then became her home for the remaining years of her life.

While she wanted to be remembered for her deep faith and love of prayer, the Sisters also remember Sister as an enthusiastic sports fan. Although she was from Ohio, her loyalty in sports was transferred to Pittsburgh, and many a prayer was sent for the Pittsburgh Pirates, Steelers or Penguins. When visiting her at the Manor, any mention of sports would cause her eyes to light up! Sister Mary Ann also enjoyed putting together jigsaw puzzles; as another hobby, she spent time re-purposing greeting cards into bookmarks. These found their way into the hands of her many friends and acquaintances.

Sister Mary Ann was the last surviving member of her immediate family. She was preceded in death by her parents, her sisters Mary, Helen, Susan, Delores, Ann, and Eileen, and brothers Michael, John and Edward. In addition to her members in community, she is survived by several devoted nieces and nephews.

The Parastas Service for Sister will be celebrated on Sunday, January 9 at 7:00 pm. The Funeral Divine Liturgy will be celebrated by Metropolitan Archbishop William Skurla on Monday, January 10 at 10:30 am. Interment will follow in the Dormition Section of Mount Macrina Cemetery. Donald R. Crawford Funeral Home in Hopwood is in charge of arrangements.

For the safety of all, masks are required for all those in attendance. 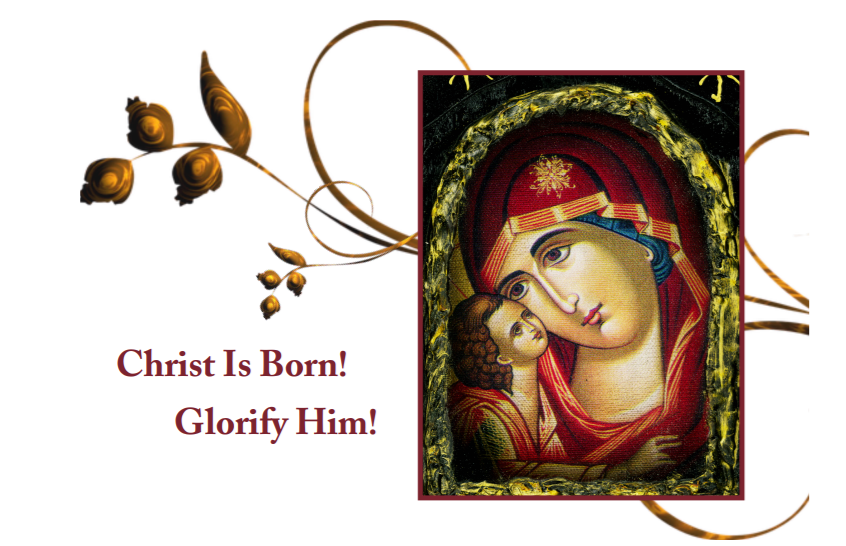 Christ is Born! Glorify Him!
The Sisters of St Basil the Great
wish you a most blessed and joy filled
Christmas Season.
May our triumphant Lord,
humbly born in a cave, shower you
and your loved ones
with abundant blessings and peace.
God is with us! S’nami Boh!
Sister Susan and Sisters
Read More
Comments Off on Merry Christmas! 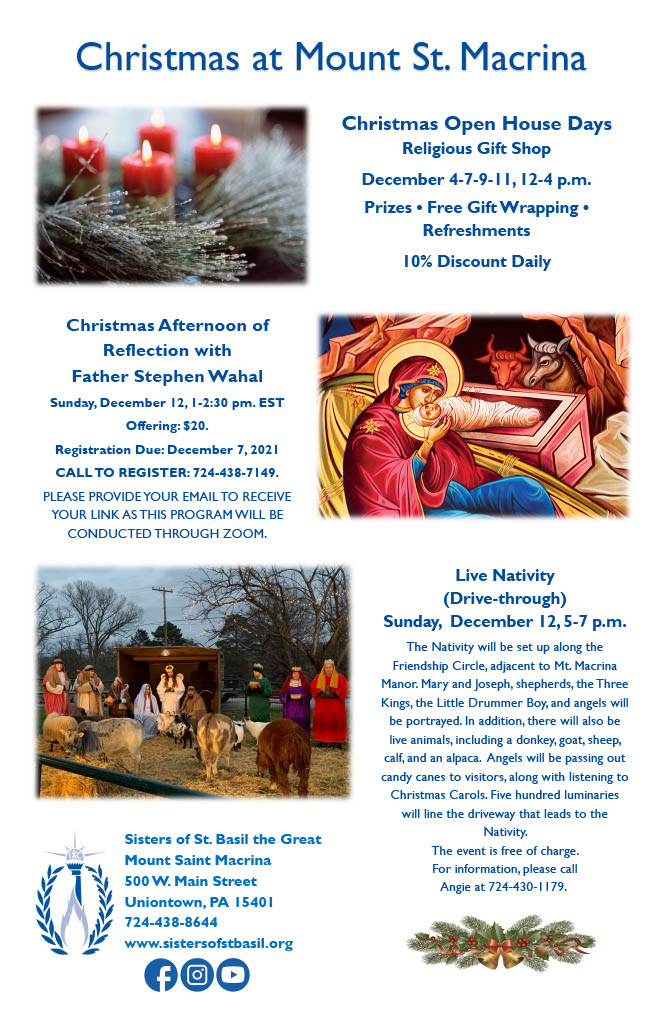 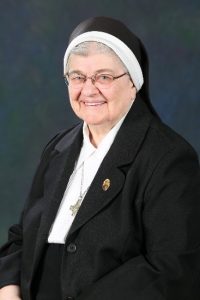 In recent years, when Sister Salome was asked what she was doing in her retirement, she would reply, “Waiting for the Lord.” This time of waiting ended in the evening of Wednesday, September 29th when the Lord came to take Sister to her heavenly home.

Sister Salome (Helen) Yanochko was born in Freeland, PA, the daughter of  Andrew and Mary (Sakosky) Yanochko. She entered the Sisters of St. Basil in Uniontown on September 15, 1950 from St. Mary’s Church in Freeland, PA and made her Final Profession of Vows on January 1, 1956 in the presence of the late Very Rev. George Bonchonsky.

From 1953, when she was first assigned to teach, Sister Salome had been busy shaping the lives of first and second graders. She loved teaching, and she spent 59 years in this ministry, 24 of these at St. Mary’s School in Cleveland, OH. Sister brought to her classroom the gift of her gentle ways and her enthusiasm for any advances in methodology. She took great delight in learning and using whatever technology was available to help those entrusted to her care.

During the summers, Sister’s artistic talent came to the fore when she spent hours faithfully decorating the large “medovniki” hearts which were so much a part of the annual pilgrimage. Each year she varied the decorations, always adding her significant touch of beauty to them. Probably her favorite pilgrimage ministry was at the ice cream stand; there she enjoyed greeting the pilgrims from the side window with a smile.

After retiring from the teaching ministry, Sister Salome returned to the Monastery. Almost immediately, looking to be helpful, she assisted the sacristan in several ways. There are also many small “duties” in a monastery, and Sister Salome took care of some of these in her quiet and unassuming manner. Among these was her careful tending to the peace plants that can be found in the foyer or corridor. We know they will miss her touch. No less will her absence be felt in her lively conversation at table, in her subtle sense of humor and in her smiles. In all, the hallmark of her work and presence was her cheerful disposition.

Sister Salome was preceded in death by her parents, her brothers John, Michael and Nicholas Yanochko and her sister Mary Kusmider. In addition to her Sisters in community, she is survived by her brother Andrew and her sisters Anna Yanochko and Irene Larkin.  Relatives and friends will be received at the Monastery on Friday, October 1, from 3:30 pm to the time of the Parastas Service which will be sung at 7:00 pm. The Funeral Divine Liturgy will be celebrated on Saturday, October 2 at 10:30 am at the Monastery. Interment will follow in the Dormition Section of Mount Macrina Cemetery. 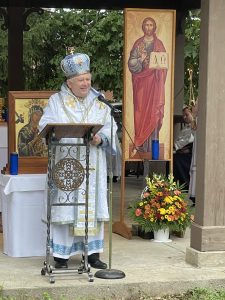 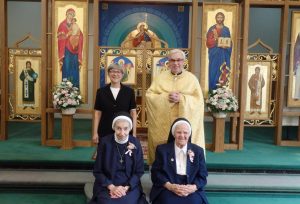 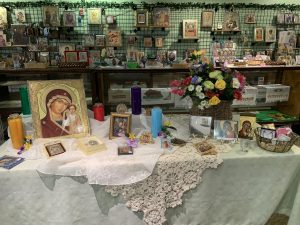 The Religious Gift Shop will be closed July 4-12. Please have a blessed and safe holiday.

We look forward to welcoming our volunteers this Saturday, June 5, for Helping Hands Day!

Just an important note: ALL WORK WILL BE DONE OUTSIDE. MASKS ARE NOT REQUIRED. See you on Saturday! 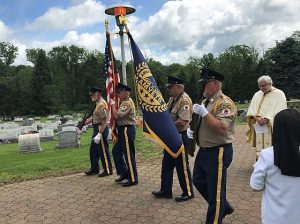 Thousands of Catholic Cemeteries across the United States will participate in services honoring those brave men and women who died while serving  in the armed forces, as well as recognizing our active military and retired veterans who have generously served our country.

Mt. St. Macrina will participate through the celebration of a Prayer Service according to the Byzantine Catholic tradition.  This Service includes special petitions for our deceased and our living military men and women.  The local AM Vets 103 Honor Guard will pay tribute with their presence and participation is procession, military salute, and taps.

The Service is scheduled for Memorial Day, Monday, May 31st, at Mt. St. Macrina Cemetery.  The Service will begin at 10:30 am, weather permitting.  The main Celebrant will be our Metropolitan Archbishop, William C. Skurla, D.D. along with Father Jerome Botsko, Chaplain to the Sisters of St. Basil.

We Sisters are honored and blessed to have the opportunity to celebrate the men and women who have sacrificed so much in order to defend the rights of all to freedom, justice, and peace!

Path of the   Warrior   (Video honoring those who gave the ultimate sacrifice.)